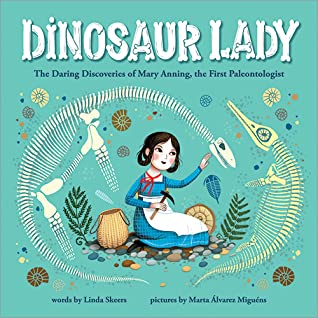 The children's nonfiction book The Dinosaur Lady: The Daring Discoveries of Mary Anning, the First Paleontologist by Linda Skeers makes a correction in the historical record giving credit to a woman for her discoveries which led to the identification of the first dinosaur. Until recently little was known about this woman, who while living in Lyme Regis on the English coast in the early 1800s, discovered, while she was searching for fossils, a full skeleton of a creature eventually named Ichthyosaurus, "fish lizard." It was ultimately determined to be an extinct creature and became the first know dinosaur. She continued discovering aspect of fossils which led to paleontology as a scientific specialty.

Last year in my role as a Cybils Award judge one of my favorite books, The First Dinosaur: How Science Solved the Greatest Mystery, also dealt with the Mary Anning and other early paleontologists and their discoveries. During her time on earth Mary Anning got very little credit for what she discovered and for her contributions to science. She was not allowed to join the Geological Society of London. Everyone was talking about her discoveries but they weren't talking about her.

Thank goodness for children's books like The Dinosaur Lady: The Daring Discoveries of Mary Anning, the First Paleontologist so that young girls know that they, too, can make great discoveries and contributions to science today.

Posted by Anne@HeadFullofBooks at 11:38 AM