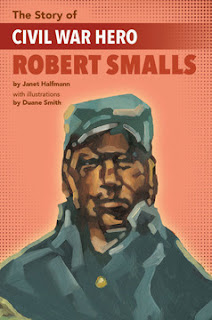 As you may have figured out by now, all of these nonfiction book reviews are over the books I read as a Cybils judge for the nonfiction category. By the time these reviews are published, three winners for this category will already be announced on February 14th. I hope to review all 21 of the finalists. Keep your eyes out for more reviews, since I think this is only my eighth, there are a lot more to come. This year in addition to books for secondary-aged students the team of judges are also evaluating nonfiction books aimed at elementary students. The Story of Civil War Hero Robert Smalls by Janet Halfman was written with that younger audience in mind, probably for 3rd-5th graders.

Robert Smalls was born a slave in 1839 in Beaufort, South Carolina. As a child he was expected to help with the household chores, but as a teen he was hired out to wait tables and make deliveries to rooms in a hotel and later had a hired job to work on the waterfront loading and unloading cargo. He had to send most of his wages home to his "master" but was able to keep a bit of what he made for himself. After growing bored with that job, he moved on to making and rigging sails and started learning the skills required to be a wheelman, or a boat pilot. When the Civil War started, Smalls would have preferred to volunteer on the Union side but was forced to work on confederate causes. One day, after loading several cannons on board a steamship, Smalls instituted a plan he has been scheming on for a while---to steal the ship, with the cannons on board, and sail it to a spot where he could surrender it to the Union Navy. His plan worked as planned and all the black men that worked on the boat along with all their family members made it to safety on the northern side. After the war, now a free man, Smalls returned to Beaufort where he was one of sixteen black men elected to Congress during reconstruction.

The short book, just over 80 pages, is designed around short chapters when contain a few pages each of Smalls story and then some relevant background information about the topics in that chapter. 'Slavery'; 'sailing ships in the 1800s'; 'what caused the Civil War?'; all helped give Smalls' story context and a fuller meaning.

As I was glancing though reviews of this book on Goodreads, I came upon a review written by a mother who had read the book to her son. She said, "Whenever I read an amazing historical book like this with my child, I am angry that my own education was deprived of these amazing stories from American history and how miseducated I was about the history of the Reconstruction era. The story of Robert Smalls is inspiring and enraging and important." I concur. Imagine for a moment that the person who had stolen the ship with several cannons on board was a white person. Don't you think that the history books would have sung his praise? It angers me that so much of what we were taught in schools only glorified white history and downplayed, ignored, or vilified history made by people of color. I am so glad that there are publishing companies like Lee and Low Books, willing to set the record straight finally!

Posted by Anne@HeadFullofBooks at 1:00 PM