The Monstrumologist by Rick Yancey

Ever had to read a book that you were sure you wouldn't like; a book that you read more from a sense of obligation or duty than from a keen desire to read it for sheer joy of reading? Well, that was this book for me. I read this book, not because I wanted to, but because it on my list of ten preselected books for the up-coming Mock Printz Workshop I will be hosting in January. The book is touted as the best horror novel of the year. As one who does not usually read this genre of books I was shocked at how horrifying and frightening it really was. Surely I didn't have to read the whole thing to discover that it wasn't my cup of tea. Right? As I read on, however, I felt more and more compelled to finish it and the plot kept me on "the edge of my seat."

Written in a kind Dickensian style, one feels for the plight of Will Henry, the narrator, who is a 12-year-old orphan and the assistant to the monstrumologist, who not only studies monsters but discovers that the most gruesome of monsters are located right at the doorstep. While there are lots of gruesome details, and creepy, spine-chilling drama, there are also lots of poignant moments and an interesting mystery that unfolds.

I will recommend this book to my readers of horror fiction and those whose really like being scared by what they read. I understand that this book is the first in a new series by Yancey. 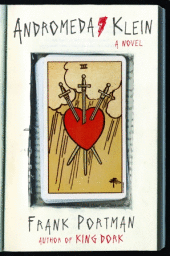 Take a occult-obsessed teenager who is hearing impaired with brittle bone disease. Add in a set of quirky friends, a dead friend who seems to still be around, tarot cards, magic books, weird parents, and problems with the friends of the library and you have a small idea how different this book is than anything you've ever read before.

Andromeda Klein is an odd, sometimes dense book that delves deeper in magic and occult than I ever cared to go but Andromeda herself is a fun and sympathetic character that I found myself pulling for through out the whole story. My favorite part of the book is the Andromeda-lexicon. Because Andromeda is partially deaf she often mishears what is said to her. Often her hearing errors are hilarious and charming. The miscues that she likes best she adds to her lexicon of words and uses as part of her vocabulary. For example she might mishear vacuum for bathroom and for the whole rest of the story whenever she has to go into the bathroom she refers to it as a vacuum. This would be very confusing except there is a lexicon glossary in the back of the book for easy reference.

Even though there is a glossary in the book to assist readers I still felt confused by all the occult references, and tarot-card characters. If I am really in to a subject I don't mind working hard at my reading but when I am not, I don't so reading this book often felt more like a chore than anything. I stuck with it since we are considering this book as a potential Mock Printz winner. I'll be shocked if it wins but it may because it certainly is unique and inventive and would appeal to both boys and girls.

Older teens. 3.5 stars out of 5.
Posted by Anne@HeadFullofBooks at 2:32 PM No comments:

Another wonderful graphic novel/autobiography. It is the story of a young boy whose father gave him cancer from too many radiation treatments during childhood. He also is raised by a mother who teetered on the edge of madness and denied him medical treatment because of the cost or the bother.

I was so wrapped up in this book that I had to sit in my library after I closed it until I was finished reading it. It didn't take long, just an hour or so, but during that I time it had my rapt attention.

I've been thinking a lot about the power of pictures in conveying a story as I've been gathering information for a teacher to use with her creative writing class on graphic novels. Small, an award-winning illustrator, uses his images effectively to convey the horrors of his childhood and the healing that followed with a minimum of words. Jules Feiffer says of this author/illustrator: "David Small presents us with a profound and moving gift of graphic literature that has the look of a movie and reads like a poem...We know that we are in the hands of a master."

I highly recommend that you go and visit Small's web-page where he has a short 4 minute slide show about the book. It is very powerful and will give you a good feel for the book.

Highly recommend teen through adult. 5 stars.
Posted by Anne@HeadFullofBooks at 10:36 AM 1 comment: