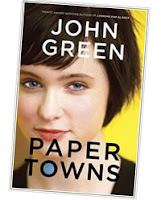 This week is the Young Adult Library Services Association (YALSA) Teen Read Week. At the beginning of the week a list of the top ten teen books, as voted by teens themselves, was published. Here is the list with a few notes from me. I've only read four of the books so I will comment on what kids are telling me about the books and what I've noticed about how the books circulate from my library.

1. Paper Towns by John Green -I really like this book. I really like John Green. His writing style is very inventive, hip, and funny. The characters in this book are well developed, likable and sympathetic. The scenes in the van are hilarious. Other scenes are poignant and interesting. I think this book totally deserved its number one spot on this list.
2. Breaking Dawn by Stephenie Meyer - the fourth book in the Twilight series. Many students have told me that they did not like this book as much as they liked the first three. Or maybe it was just that it was the last book and they were making room in their life for other literature after being consumed by Bella and Edward for weeks and months. I have two copies in my library and neither are currently checked out but all the other books in the series are, so students should be making their way back to this book again soon.
3. The Hunger Games by Suzanne Collins. I blogged about this book and it's sequel, Catching Fire, a few weeks ago. This is the most exciting book that I've read all year. Students are telling their friends about this book and are waiting in line for the sequel. I predict that this book will continue to build up more and more fans over time. And there will be a third book though it doesn't even have a release date yet. If you haven't read this book yet, I recommend you do.
4. City of Ashes by Cassandra Clare. The second book in the Mortal Instruments series. Somehow I missed all the hype about this series until the third book, City of Glass, came out just recently. My students are just starting to read the series and seem to like the first book, City of Bones. I've placed it on my reading list and hope to get to it soon.
5. Identical by Ellen Hopkins. Girls, in particular, are crazy for Ellen Hopkins books which are all written in verse. I haven't read this one but I liked Crank, her first book about a girl sliding into Meth addiction.
6. The Graveyard Book by Neil Gaiman. I really enjoyed this Newberry Award winning book. Gaiman is a masterful writer and this book is quite unique in it's storyline and plot. Many of my librarian friends didn't care for it. But I think they were reacting to how scary this book is for a kids book. Teenagers do fine with it.
7. Wake by Lisa McMann. I've only had two kids tell me what they thought of the book. One liked it, the other didn't. The storyline sounds like something that teens would like...getting sucked into other people's dreams...Hum.
8. Untamed by P.C. and Kristin Cast. Once kids are completely finished with the Twilight series and are casting about looking for something else to read they quite often land on The House of Night series. (This is the fourth book in it.) They usually consume the books as fast as they can get their hands on them. Start with the first book, Marked.
9. The Disreputable History of Frankie Landau-Banks by E. Lockhart. This book is the only book on this list to win a Printz Honor this year and it deserved it. In fact, I liked it better than the Printz Award winner, Jellicoe Road. Frankie Landou-Banks is a very likable character who outsmarts a whole club of boys through a series of pranks and foibles. A fun and thoughtful book.
10. Graceling by Kristin Cashore. I got this book for the library right at the end of last school year and kids were climbing over each other to have a turn at reading it before summer break. I just got the sequel, Fire, this past week. We'll see if it generates as much interest. This book has made it onto my reading list, but I will have to stand in line behind a long list of students waiting for it first.
Posted by Anne@HeadFullofBooks at 7:04 PM 1 comment:

The Book of Lost Things by John Connolly