What Literary Characters Would I Like for Best Friends?
Note to reader:  My best friend in high school was male.  In fact, we are still great friends.  So while making my selection of potential best friends from the literary world I did not think it necessary to select same gender characters.  This list is in random order. 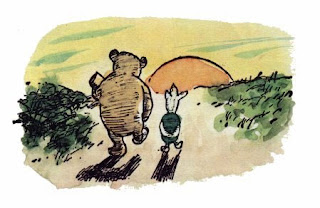 Piglet sidled up to Pooh from behind.  “Pooh,” he whispered.
“Yes, Piglet?”
“Nothing,” said Piglet, taking Pooh’s paw, “I just wanted to be sure of you.”

How about you?  Do you know any literary characters you would like to have for a best friend?

Posted by Anne@HeadFullofBooks at 8:31 PM