Friday Quotes: ON THE COME UP

The book I just finished reading (with a short review)... 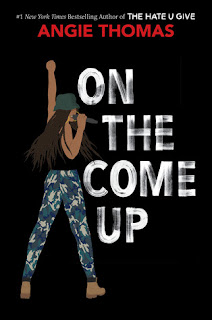 Title: ON THE COME UP by Angie Thomas

Summary: Bri wants to be a rapper like her late father who didn't quite make it big before he was murdered. She's like to make it great or at least get out of her neighborhood which seems like a big dream. Then her mother loses her job, they have to get food from a food pantry, and the heat and lights have been turned off. Now Bri wants to make it big to help her family. To begin with she has to get invited to compete in the Ring. The quote from book beginnings is Bri daydreaming that she gets that invitation to rap in the ring that night, but she hasn't got the call, yet. The Friday 56 quote shows the crowds reaction after she finishes her rap. They go bananas. This is only the beginning of what Bri hopes will be a big career in rap.

Review: Angie Thomas burst onto the YA lit scene two years ago with her book THE HATE U GIVE. She is a phenomenal writer and gives the reader a realistic view of life in an impoverished community where most of the people are people of color. In both books I felt like I was reading about another culture, it was so foreign to me. Thomas brilliantly lets her readers experience the hopes, joys, and challenges of Bri and her family without blinking. At one point in the story Bri's mother exclaims that she is being accused of being poor, as if poverty is a sin. That really hit me since so often people living in poverty are treated as if they are sinners. Bri is a very flawed character, but what teen isn't a mess of maturity and immaturity? Sometimes I just wanted to shake her for the decisions she made. And the language, oh the language. Be prepared for lots of swearing and slang.

On the Come Up has earned six starred trade reviews, which is almost unheard of. I think it deserved all the hype though as the dialogue is so authentic, the plot so realistic, and the character growth appreciable. Several reviewers have criticized the book for trying to tackle too many topics (poverty, drugs, family dysfunction, gang affiliation, school issues, profiling, rap music, friendship problems, and sexual orientation.) Reading over the list, it does sound like a lot but I think it is very possible that a high school student might have to deal with a whole plethora of issues every year. I recommend the book highly.

-Anne
Posted by Anne@HeadFullofBooks at 10:29 PM