Review and quotes: Daisy Jones and The Six by Taylor Jenkins Reid

I remember where I was when I heard "the song" for the first time. I was in my pottery class in my junior year of high school in 1973 or '74. All we had to do was throw pottery on a wheel, listen to music, and goof around. I'm pretty sure the song came on when I was goofing around. I can't remember the actual song now but I remember the group:  Fleetwood Mac. "The song" made me feel so many things, including love and I wasn't in a relationship at the time. Sometimes special songs just do that, they make you feel feelings and transport you to someplace new and exciting. And those special songs usually imprint on the brain a permanent feeling, or remembrance of a feeling for life. 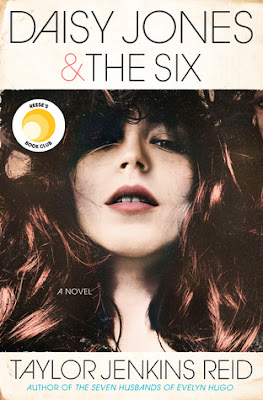 Fleetwood Mac became one of my favorite rock-n-roll groups from that day forward. I followed them and their music through my early adulthood until the band broke up sometime in the late '80s. So imagine my fascination with Daisy Jones and The Six when a fellow book club member said she had heard it was loosely based on the Fleetwood Mac story.  But as I started reading Daisy Jones the story didn't jive at all with what I knew of the rock band's history. This chased me to the Internet where I found this article by Taylor Jenkins Reid about her inspiration for the book. Apparently when Reid was a young teenager she ran across a video of Stevie Nicks and Lindsey Buckingham playing the song "Landslide" as part of their The Dance tour. She had been aware that Nicks and Buckingham had been romantically involved at one time but no longer were. As she watched the video there was a shot of Buckingham watching Nicks sing. He has his hands on his chin as he watched Nicks sing as if she were a miracle. In that instant Reid knew that the couple still loved each other.

Years later she watched The Dance show again, this time she paid attention to all the emotions given off by the singers on each song and she realized that good singers convey a plethora of emotions during a concert and those emotions change according to the song being sung. And she came to understand something her younger self hadn't known: Love makes no sense. Now she questioned the love between the two musicians. She hung onto to those thoughts until a few years ago when Reid decided to write a book about rock-n-roll, she saw how she could be use her impressions of Nicks/Buckingham in a story. She wanted to show how groups evolve and how tough it is to sing your emotions every night, about how sometimes the group has to break up under the strain of all those emotions. "I wanted to write a story about how the lines between real life and performance get blurred, about how singing about old wounds might keep them fresh" (Reid).

That is exactly what Reid wrote. When brothers Billy and Graham Dunne form a band which becomes The Six, they are good but not special. Only when a beautiful but messed up woman, Daisy Jones, joins the band and enters into a song-writing partnership with Billy does the band finally take off. But Billy who is a recovering addict and happily married man, is drawn toward Jones, as she is to him. The two recognize that they aren't right for one another but their chemistry on stage belies that fact. This push and pull is played out with other band members too until the band cannot survive under the pressure that is ready to implode from the inside. Outside they have the world's most popular album, inside they cannot survive together. And to the dismay of all the fans, the band breaks up.

The book is written in what I would describe as a transcript style. Each band member and other members of the team are seemingly interviewed about the events about the formation of the band through the eventual breakup. Each views the action from their own point of view, making the book almost seem like it is nonfiction. In fact there is a trick to make you think this right from the beginning. An "Author's Note" is really part of the story, not a note from Reid to us, the readers. HA! (See quote below.)

A friend who just recently finished the book said she enjoyed how "fresh" the writing was. I agree. There is something new and exciting about the book and I enjoyed reading it very much. I also understand that it is being made into a movie and the songs which Billy and Daisy wrote will actually be put to music for the film. That will be so much fun hearing for real what my head made up as I read about the songs.

Two quotes from the book are for Book Beginnings and Friday 56:


AUTHOR'S NOTE---This book is an attempt to piece together a clear portrait of how the renowned 1970s rock band Daisy Jones & the Six rose to fame--- as well as what led to their abrupt and infamous split while on tour in Chicago on July 12, 1979.


BILLY: It did have that kind of feeling where...you know you're in a time of your life you'll remember forever.

In case you want to see the Buckingham/Nicks "look", here is the video. The "look" occurs around  minute 3:30.

(RHS Book Club selection, September 2019)
Posted by Anne@HeadFullofBooks at 11:32 AM