Review and quotes: THE NIGHT WATCHMAN. Where I examine why this book won the Pulitzer Prize for Literature? 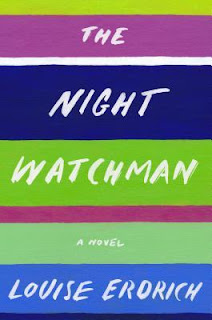 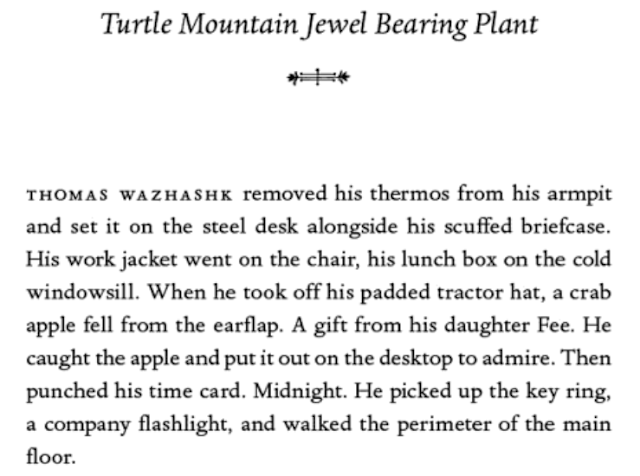 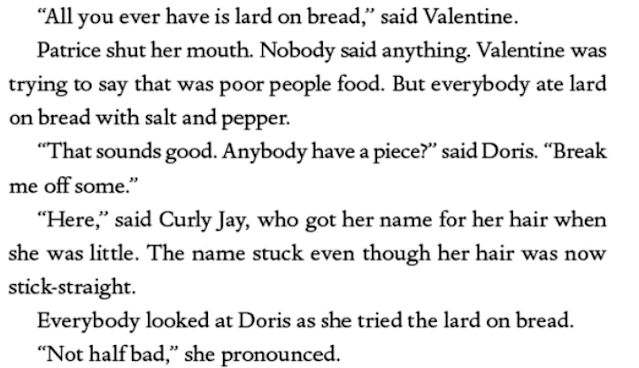 Summary: Drawing on her own grandfather's letters, written when he was a tribal council member, Louise Erdrich shines a light on a shameful event (or near-event) in United State history when Congress introduced a bill to terminate treaty rights of some Native tribes, including the Turtle Mountain band of Chippewa of North Dakota. The bill would have forced assimilation onto tribal members and a big land grab for whites.

The opening lines of the book introduce Thomas Wazhashka, the fictional character fashioned after Erdrich's grandfather, who works at the jewel bearing plant as a night watchman and spends part of his time there writing letters seeking support about tribal concerns. Ultimately he and other tribal members go to Washington, D.C. to protest the termination bill, helping to ensure that it doesn't pass out of Congress.

In addition to the activism, the book is really about persistence and survival. The Turtle Mountain Chippewa showed dogged determination to survive against all odds. The poverty and the racist abuse were in plain view for the readers to see. Yet dignity and tradition also took center stage leaving readers with the opportunity to appreciate not only the hardships but also the culture and beauty of a people long marginalized.

Review and thoughts about the Pulitzer Prize: Louise Erdrich herself wondered why anyone would want to read a book about a dreadful bill that passed out of Congress in 1954. Yet, here she is the winner of the Pulitzer Prize for fiction for her book, The Night Watchman. As I read it, a book club selection, I kept asking myself what was it that made this book, this moment, this story so exceptional, worthy of such a grand prize? First I have learned that Erdrich, a member of the Turtle Mountain band of the Chippewa, lives in Minneapolis. It broke her heart to see what happened in her city with George Floyd's murder and the subsequent protests. Race relations in this country are so messy, not only for blacks but for all BIPOC individuals. This story, about the atrocities leveled against Native people throughout history, is just one more account to prove this point. Erdrich called the Pulitzer a "welcome contrast to the news of the last year." Stories of race, racism, and colonialism swept the Pulitzer Prizes for the Arts this year. Another Native author, Natalie Diaz, won the poetry award for Post Colonial Love Poems, and all the other awards in the arts went to those writing about the Black experience (Pulitzer Prize Winners, 2021).

The Pulitzer committee said this about the book: It is "a majestic, polyphonic novel about a community’s efforts to halt the proposed displacement and elimination of several Native American tribes in the 1950s, rendered with dexterity and imagination." A Native American Studies professor from Dartmouth, N Bruce Duthu, said “Perhaps more than any other contemporary writer, Louise has helped to elevate the national IQ on issues of social, historical, and legal significance relating to Native peoples. She is a national treasure” (Dartmouth). Clearly The Night Watchman and Louise Erdrich were worthy of this, the grandest of all book prizes.

But what can I say about it on a smaller scale? At first I found the book to be terribly confusing. There are so many characters and there is a lot of story or stories to be told. But once I settled in I was just simply enraptured by the tales and what I was learning. I was profoundly moved by the conversation Thomas had with a white teacher who asked him what would be wrong with assimilating into white culture. Thomas explained that question would be like asking a person living in England, or some other European country to give up their culture when a conquering country sweeps in. "How would you feel? Thomas asks. The teacher said he'd be angry and wouldn't do it. Thomas pointed out that is what whites expect us to do. "This is our land. We were here first, yet whites sweep in and expect us to change to be like them, not taking into consideration any of our customs or traditions."

Erdrich gives us more than a peek at these cultures and traditions, too. The mysticism, the connection to nature, the strength that comes from family and community all gave the story tremendous depth. And then the characters -- I liked them all -- especially Patrice who wants to do more than survive, she wants to thrive. After finishing the book I felt like I wanted to keep living with these characters for a while, wanting to know about happens to them after the story ends. This doesn't happen to me very often, but it did with The Night Watchman.

Lastly, I listened to the audiobook read by Erdrich herself. I felt that the speed of the recording was too slow for my taste so I bumped the listening speed up to 1.3 which solved that problem. Not sure if this solution would work for everyone but it worked for me.

Posted by Anne@HeadFullofBooks at 4:33 PM