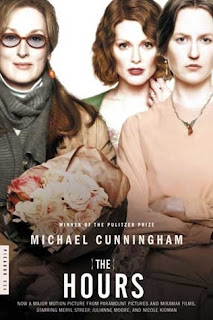 Back in 1925 Virginia Woolf published a masterpiece of literature: Mrs Dalloway. It was very avant-garde for the time in the modernist style where time, perspective, and point-of-view are delivered in a non-linear format. Mrs. Dalloway, originally titled 'The Hours', is considered by many to be one of the best English-language novels ever written. And I haven't read it.

But I just finished The Hours by Michael Cunningham which takes the Mrs. Dalloway story, dusts it off, and gives it a modern (for the late 1990s) update. In the original, the action takes place in a 24-hour period. In the opening scene Woolf's main character, Clarissa Dalloway, is preparing to host a party that evening and she decides to go buy the flowers herself. In Cunningham's version, one of three main characters, Clarissa, is also planning a party and she also decides to buy some flowers. And so begins the similarities with the original novel.

The Hours is a story of three women: Clarissa Vaughan, preparing a party for a long-time friend who has just won a literary award; Laura Brown, who lives in a 1950s Los Angeles suburb and worries that she is going slowly mad; and Virginia Woolf, who is living with her husband in a London suburb after she had experienced a mental breakdown. It is here that she begins her work on Mrs. Dalloway. Eventually at the end of the book all three of the stories coalesce and intertwine in such a thoughtful and graceful way. It was a perfect ending after a rather depressing tale.

Author Michael Cunningham not only tells the Mrs. Dalloway story through his three characters but he also weaves factual aspects of Virginia Woolf's life into the story, starting with her suicide in 1941 and working backwards, showing both her brilliance and her tentative grasp on reality. Cunningham also imagines what must have been going through Woolf's mind as she created her masterpiece.

I decided to read The Hours now as part of my march to read past Pulitzer Prize winners. I'd long wanted to read it but kept putting it off since I hadn't read the original and felt I would miss something without it. Well, I may have missed something but it wasn't too noticeable as The Hours stands up fine by itself. Before starting this review, however, I did visit Shmoop and read through the introduction and summary of Mrs. Dalloway. Even with that short amount of homework I was able to see the similarities between the two and which secondary characters played which roles. That was fun. For example in The Hours, the man for which the party is being thrown is Richard. He is dying from AIDS and is just about withering away to nothing. In Mrs Dalloway a similar character named Septimus has returned from the war (WWI) and is shell-shocked, just a skeleten of his former self. Both men meet a similar fate.

Of the six Pulitzer Prize winners I've read this year so far, The Hours is my favorite. I'd watched the movie starring Meryl Streep, Nicole Kidman, and Julieanne Moore several years ago and it seemed to run through my head as I read. Either the movie stuck to the book closely, or I only remembered highlights which kept shining through my memory. The book is also blessedly short, 226 pages. I am so tired of trudging through long tomes. It was like taking a vacation, reading such a short book.

Oddly I was not able to find a statement from the Pulitzer committee as to why they selected The Hours for the 1999 prize. One can only guess why they thought it was fabulous especially since one of the finalists that year was The Poisonwood Bible by Kingsolver.

Posted by Anne@HeadFullofBooks at 10:57 AM