TTT: My favorite books in a series by numbers 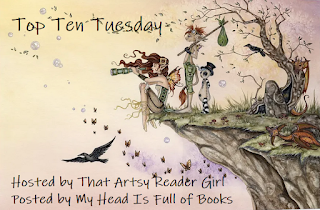 As a teen librarian I felt an urge to read widely so I rarely would complete series once I got a feel for the story line and the author's writing. Of the many, many series I started it was rare that I would finish them. I did complete all the books in the series listed above, however.

Posted by Anne@HeadFullofBooks at 2:24 PM