Six Degrees of Separation: Hamnet to... 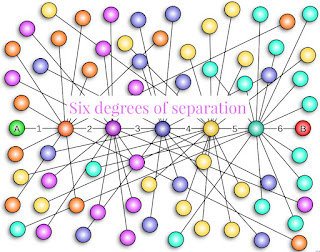 Six Degrees of Separation (from a past project):

Hamnet by Maggie O'Farrell
The subtitle of this book is "A Novel of the Plague".
↓

Year of Wonders: a Novel of the Plague by Geraldine Brooks
This one is easy. They have identical subtitles. It is also set in England in the 1500s and centers around an actual community in England that quarantined itself during the plague. A few people survived.
↓

The Great Believers by Rebecca Makki
This book is about the AIDS epidemic from it's inception in the 1980s. Interestingly there is a relationship between those who survived the plague from the village outlined in The Year of Wonders and people who were "immune" to AIDS centuries later.
↓

Station Eleven by Emily St. John Mandel
The story of the survivors twenty years after a cataclysmic pandemic. We read this book in both of my book clubs. I liked it better the second time around.
↓

The Uncommon Reader by Alan Bennett
Another book re-read for my second book club. I liked this one the second time around better also. Set in England. It is quite humorous.
↓

The Unlikely Pilgrimage of Harold Fry by Rachel Joyce
Full of British-y humor. Harold finds answers and peace as he walks.
↓

Shakespeare: The World As Stage by Bill Bryson
Written by a very humorous author, this book answers a BIG question: Did William Shakespeare really write all those plays?
↓

Hamnet by Maggie O'Farrell
And we circle back to this wonderful story imagining what life was like for Shakespeare and his family.
I know. I am about eight or nine months late on this 6-degrees post. I keep forgetting to check on it every month and usually opt out if I haven't read the first book. I loved Hamnet and liked thinking about it and the connections to other books. I did find this time that I kept attempting to guide the connections but the books were having none of it. They crowded in and demanded that I add them next. If some of my connections seem odd, it isn't my fault. The books chose themselves!  Ha!
If you want to give this task a try, the October book is really a short story: "The Lottery" by Shirley Jackson. Check this website for information about the meme:
BooksAreMyFavoriteAndBest
-Anne
Posted by Anne@HeadFullofBooks at 2:06 PM