Review and quotes: PRIDE AND PREJUDICE with Hugh Thomson illustrations 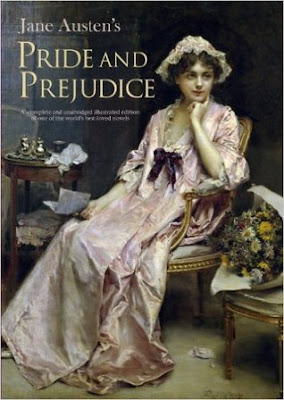 It is a truth universally acknowledged, that a single man in possession of a good fortune, must be in want of a wife.

Summary: With five unmarried daughters on her hands, and the prospect of losing the family home on the horizon, Mrs. Bennet is preoccupied with the topic of marriage, more specifically, the marriage of her daughters. When the estate called Netherfield Hall is let to a young bachelor named Charles Bingley, Mrs. Bennet is sure he will want to marry one of her daughters. But true love does not always fall into straight lines and along the way the Bennet family, their neighbors, and relatives will have to hang on for a bumpy ride before coming to rest at a very satisfactory ending.

This edition is gloriously illustrated with drawings done by Hugh Thomson. His illustrations have been held in high regard by Austen fans since his work first appeared in the 1894 edition of Pride and Prejudice. At the time of its publication a writer for The Times noted: "Mr. Thomson's pencil seems to have caught the very spirit of Jane Austen's inimitable pen, and no one who loves Pride and Prejudice will fail to recognize the extreme felicity, grace, and humor of his charming illustrations." Every page of this edition contained some illustrations, even if they were just flowers or small birds but usually some illustration done by Thomson to match the action on the page. I was simply charmed.

Review: The opening line, "It is a truth universally acknowledged..." is one of the best known and oft repeated lines in all of literature. Pride and Prejudice is also one of the most beloved novels ever written. Even people who haven't actually read the book, love it because of the plethora of wonderful movies made from it. People love this book so much that others, who haven't read the book, will lie about reading it anyway.  "P and P is the tenth most common book people lie about having read when they really didn't" (Elle).

When I was in 5th or 6th grade I got my hands on the Great Illustrated Classics version of Pride and Prejudice for children. I remember reading, and rereading the terribly romantic scene when Lizzy and Darcy are walking around the garden and he declares that he still loves her. So many swoons. I'd never read anything so romantic in my short life. Ever since that first reading of an abridged version I have loved the book with all my heart. I can't remember when I first read the unabridged version, probably high school and maybe again when I entered my Jane Austen phase -- reading all her novels, one after the other. I always seem to find time to reread my favorite sections just like the first time through. Around that same time I became a collector of Jane Austen movies on DVD and I rewatch them with some regularity. Unfortunately these movies, and my frequency of viewing them, has led me to think I know the book better than I do. That is what I found so delightful this time through, recognizing those parts not included in the movies, including the longer dialogues, and the frequency that characters came into contact with each other.

When I was working as a school librarian I would sponsor a Jane Austen week once a year. A Jane Austen movie, divided into five parts, would be shown during lunch and I would give students a little history of the time period (Regency) and tell a bit about the author. I also would tell the students, and I still believe this, that they may want to watch the movie before embarking on the reading of one of Austen's books. The long paragraphing and the spelling of some of the words (chuse and dropt, come to mind as examples) can be a bit off-putting for teen readers who are used to standard spelling and terribly short paragraphs.

This particular edition of P and P is an odd size, about the dimensions of a children's picture book. It was tough to hold if I was reading in bed and I often found myself having to adjust the angle of the page due to light bouncing off the shiny paper. In a way I enjoyed this reading experience better than I would have with a standard book. Each chapter fit within the confines of two or three pages and those long-g-g-g Austen paragraphs were broken up by the darling illustrations.

It's been a few days now since I finished my rereading of Pride and Prejudice and I confess I wish I wasn't finished. I love living with the Bennet girls with the confines of the pages of this marvelous book and I miss it when I'm done. Italo Calvino defined a classic as a book "that is never finished saying what it has to say." For over 200 years people have been reading and re-reading Pride and Prejudice and it isn't finished saying what it has to say yet. Thank goodness! 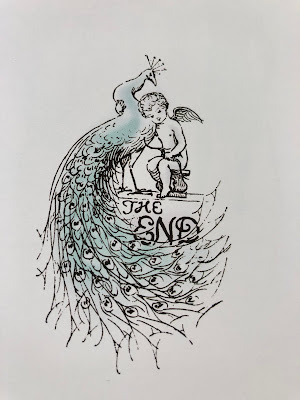 Posted by Anne@HeadFullofBooks at 4:04 PM