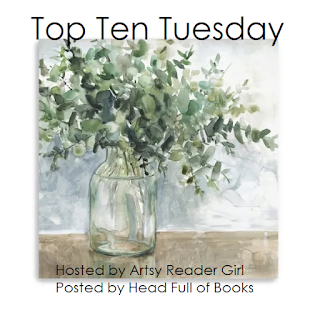 Top Ten Tuesday: The assignment this week is to name my favorite literary crushes. I've done this assignment several times. See that list here. Instead, today I will rank all of Jane Austen's available men, from most crush-worthy to least.

These are the men I'm choosing from in my ranking:

My ranking (biggest crush to no crush at all):

1. Fitzwilliam Darcy: He's rich and handsome; he becomes a better man; and saves the day.

2. Captain Frederick Wentworth: His love was true over seven years.

3. Henry Tilney: He stood up to his terrible father at great cost.

5. Edward Ferrars: bumbling but sweet; does the right thing in the end.

6. George Knightley: like a big brother until confessions of love.

7. Edmund Bertram: kind to his cousin when his family wasn't; admitted he was wrong.

8. Young Stringer: kind; hard worker; interested in further education (But I'm not sure this character was an actual character in the portion of Sanditon that JA wrote.)

9. Charles Bingley; kind and bumbling but easily swayed by sisters.

10. Henry Crawford: I believe he really did love Fanny Price but didn't know how to comport himself.

11. Sidney Parker: Snobbish, yet comes around to being quite charming, before he 'takes one for the team.'

12. Frank Churchill: Not a bad guy, just a guy with a big secret.

13.  John Willoughby: I know he truly loved Marianne but had to abandon her for his greater love for money.

14. Mr. Collins: weak and sniveling but not mean.

15. William Elliot: He was after a title and willing to use his cousin to get it.

16. George Wickham: a liar and a cheat, but apparently quite personable.

18. John Thorpe: a liar and a cheat, but not personable.

Posted by Anne@HeadFullofBooks at 8:30 PM