Review: ONE OF OURS 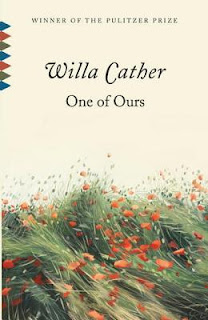 One of Ours by Willa Cather won the Pulitzer Prize for fiction in 1923. World War 1 had been over for a few short years before it was published and the world was still reeling from the wars effects as well as the toll that the Spanish Flu pandemic had on the world. Recently I have decided that the Pulitzer Prize is most often awarded to the book or the author that most captures the time and place in which it is published. That is why, in my opinion, many of the award books don't speak very loudly to subsequent generations. Reading One of Ours in 2021, almost 100 years after it was published in 1922, most certainly felt like taking a trip down a historical lane, yet Cather didn't write the book as a historical novel, she wrote it as a modern tale of woe.

Claude Wheeler is a sensitive young man who never seems to fit where ever he is. He is the middle child of a wealthy farming family in Nebraska. His father is overweight and crass. His opinion stands and if anyone suggests another there will be consequences. His mother, though loving and kind, is also very pious. It is her deepest desire that her son will find God. His brothers aren't like him at all, so he has to look outside the family for companionship and camaraderie. His parents send him to a Christian college even though Claude doesn't think much of the teachers. When he requests a change to the state college, his request is dismissed out of hand. While he is away at college he makes friends with three brothers and their mother. Though poor, all three seem to aspire to greatness and have a direction in which to take their lives. Claude does not. When his time in college is cut short by his father's decision that Claude should come home and run the farm, he does it dutifully but not happily. When he returns he reconnects with an old school mate, Enid, and decides that she would make a fine wife. But as it turns out, Enid made a better friend than a wife where she is more interested in her missionary aspirations and her volunteer work on the cause for prohibition. Claude always seems to be oppressed by his family and now his wife.

But then the US joins in the war in 1917 and Claude enlists as an officer. The war ran through the first part of the book as an undercurrent. News of war filled the newspapers and Claude and his mother and her housekeeper would read over the news together every day. But the war also seemed far away and unreal to them. Even when Claude boards the ship heading to France with his troops, the excitement of the journey is much in the soldier's minds than the destination and the war. But just a few days into their crossing, men start to die from the influenza. Reality hits everyone quickly and hard. Healthy men, in the prime of their lives, are gone in less than 24 hours. During this time Claude is acutely aware of how unprepared he is for this experience but he also revels in the responsibility that comes with his role. For the first time in his life he feels like he belongs and that he is where he is supposed to be.

This awareness that comes upon Claude of his place in the world and war is a recurring theme throughout the rest of the book. After a bloody battle when Claude has to decide to send another officer and his sergeant into harm's way, he reflects on their possible death philosophically, thinking that at least he was given the privileged to know such remarkable men in his life. Claude doesn't make it out of that battle either. Several years after the war, his mother reflects on the troubles that returning soldiers are having trying to fit back into society after living through the tragedies of war. She feels sure that Claude would have been one of those men, so perhaps his death was a blessing, of sorts.

Apparently Cather wrote One of Ours based loosely on the life of her uncle who died in WWI. His family gave her access to his journals and letters that he wrote before his death. Hemingway was critical of her combat scenes. Even Cather recognized that she couldn't really know what it was like to live in a trench continually bombarded by bullets and mustard gas. One of the details that I found odd was how well the soldiers seemed to eat. That is not what I have heard from previous things I've read about war, where soldiers often go without food for long stretches. Though she was criticized for her war writing, I thought the second half of the book, set in France, was far superior to the first half. In fact, the ending alone was worth the effort it took to read the book.

And effort it was. I started off thinking that One of Ours was a short book, with only 171 pages, because the e-book checked out from the library said so. Yet, each time I sat down to read for a while I would be surprised at how slow my progress. Through investigation I discovered why -- each page was really four or five pages on the e-reader. It turns out that this short book was really a rather long book, the first edition was 459 pages long! That means I can count it as one of my Big Book Summer Challenge selections, in addition to a classics club spin choice. In addition, as a Pulitzer Prize winner I get to add it to my Pulitzer Challenge. Three in one!

So do I recommend One of Ours? Yes. Why? Because this book was written about the time, in the time it is about. Cather has a very easy to read writing style. I've probably learned more about life on the prairie during the early part of the twentieth century from her than anyone.

Posted by Anne@HeadFullofBooks at 3:39 PM