Poetry review: WADE IN THE WATER 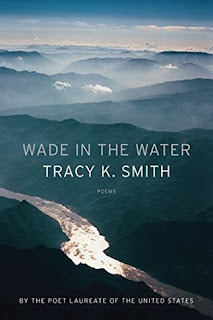 Wade in the Water: Poems by Tracy K. Smith is possibly one of the most creative yet alarming poetry collections I've ever read. Tracy K. Smith, a past Poet Laureate for the United States, uses letters and documents written by others and turns them into poems that cut and twist and bring full-frontal impact with their swing. As I read the poems I'd think about what I was reading and wonder at the spelling (misspelling) and odd topics, not really grasping what I was reading. At the end of the book are the author's notes which answered a few of my questions.

For example, a relatively early poem in the collection, "Declaration", starts off with these words,

sent hither swarms of Officers to harass our people

He has plundered our --

destroyed the lives of our--

Who is "he?" Tracy K. Smith is a black poet, so I instantly think "our people" as Blacks, possibly slaves. The poem is disturbing at its core but more so when I learn that the poem is an erasure poem and what is being erased was the Declaration of Independence. Now I read the poem with different eyes and wonder at its double meaning. Poetry has the power of to cut right to the quick. (As an aside, I showed this poem to my husband who started reading it aloud. After the first two lines he said, "Why, this is taken from the Declaration of Independence." I guess you now know which one of us has read that great American document closely, and which one of us hasn't.)

Another poem called "I Will Tell You the Truth about This, I Will Tell You All about It" is composed entirely from letters and statements of African Americans enlisted in the Civil War, and those of their wives, widows, parents, and children. Smith wanted the their voices to command all the space within her poem. This letter written by Martin Lee to the head of the Freedman's Bureau in Georgia in 1866 begins, "Dear sir    I take the pleashure of writing you / A fue lins hoping that I will not ofende you." It was a loving, simple request to have the Freedman's Bureau help reunited his scattered family. It is heartbreaking.

The poem I've thought the most about since finishing this poetry book is "Watershed". It is a 'found poem' drawn from two sources: a New York Times Magazine article by Nathaniel Rich call the "The Lawyer Who Became Dupont's Worst Nightmare", and excerpts of the narratives of survivors of near-death experiences as cataloged on www.nderf.org. This impactful poem is about how Dupont bought land from farmers to dispose of their dangerous chemical PFOA. It leaked into the water and started poisoning cattle first, then people. Dupont turned a blind eye.

Clients called R to say they had received diagnoses of cancer
or that a family member had died
W who had cancer had died of a heart attack
Two years later W's wife died of cancer
They knew this stuff was harmful
and they put it in the water anyway
For days after reading this I walked around wondering how people working for Dupont, or any polluting company, could think this was going to work out for them. Don't they live on the Earth, too? Don't they and their family need to drink the water and breathe the air polluted by their own chemicals? Companies are not people. People had to make the decisions to dispose of the pollutants in such a way as to kill off whole communities. I was shocked to learn such details in a poetry book, but why not? With the poetry comes the emotional punch needed to stir me out of my stupor.

From my examples I am sure that you realize Wade in the Water is not an easy poetry book to read or to digest. But it is vital that we take the time to ponder hard and disquieting facts. The title comes from an old negro spiritual and was used by Harriet Tubman as a signal to escaping slaves to get in the water to throw the dogs slave-catchers used off the scent. "Wade in the water, wade in the water, children. Wade in the water. God's gonna trouble the water."

Sometimes we need to hop in the water, too, and let God, or poetry books, trouble us to action.

Posted by Anne@HeadFullofBooks at 10:37 AM