Review: The Overstory by Richard Powers 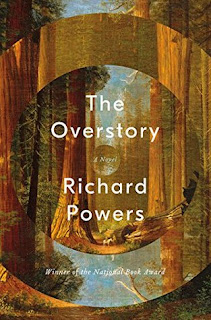 Years ago when I was in college, my bacteriology professor went off-script and spent a whole class period lecturing us about the perils of the deforestation of the Amazon. I sat spellbound as he talked about this rainforest being the lungs of the earth where more than 20% of the oxygen for the whole earth is made. If we didn't heed his warning he feared we would all be doomed. That lecture was conducted in 1978. We haven't learned the lesson that old professor taught and now the Amazon is burning. Will we recover?

That lecture caused me to stop and think about the interconnectedness of life. I had never even thought about trees in the Amazon, a continent away, being important to me. I barely thought about the trees in my backyard or in the neighborhood park even though I had lived through the first Earth Day in April 1970s and did my part by picking up trash alongside the road. In fact, I may have fell under the spell of Earth Day when a marketing firm told us to "save a tree, use plastic bags instead" and I thought that was a good plan. I am ashamed to admit it, trading paper for plastic. Ugh.

While on my honeymoon I walked among the tallest trees on earth in the Redwoods National Park in Northern California. I was awestruck. There is something so majestic about those trees. If only I could slow down my wavelengths I was sure I could hear them talking. Many years later I found myself reading several books about trees. All had a huge impact on me: Prodigal Summer by Barbara Kingsolver questions the wisdom of cutting down all of the American Chestnut trees when they were struck by a blight in the early 1900s; Serena by Ron Rash showed the greed of timber barons in clear-cutting whole forests in North Carolina in the 1930s; The Big Burn by Timothy Egan talks about the formation of the National Forest Service after a huge forest fire that nearly consumed a whole state; Remarkable Trees of the World by Thomas Pakenham which contains photos of the world's most marvelous trees; and more recently Lab Girl a memoir by Hope Jahren, a geobiologist who opened my eyes to the wonder of trees and the ways they communicate with one another. Reading those books and my many walks among the trees of the Pacific Northwest were my preface to Richard Powers' amazing book The Overstory which is not only about the interconnections of trees but the interconnections of people.

The Overstory is such an epic story on such an important topic (saving the planet for trees through acts of resistance and and in the process save ourselves) I don't really feel qualified to review it. I will do my best but need some help. Therefore, I will point you to the sources I used to gain some insights. I recommend that you visit these sources, too.

First, visit the Pulitzer Prize website. The Overstory won the 2019 Pulitzer for Literature.


An ingeniously structured narrative that branches and canopies like the trees at the core of the story whose wonder and connectivity echo those of the humans living amongst them.

Next read the New York Times book review written by Barbara Kingsolver, titled "The Heroes of this Novel are Centuries Old and Three Hundred Feet Tall." Kingsolver gives a fantastic summary of the book and makes the case for Richard Powers being the real-deal---a man who knows what he is talking about when he writes about science.


Most novelist don’t know beans about botany. Richard Powers is the exception, and his monumental novel “The Overstory” accomplishes what few living writers from either camp, art or science, could attempt. Using the tools of story, he pulls readers heart-first into a perspective so much longer-lived and more subtly developed than the human purview that we gain glimpses of a vast, primordial sensibility, while watching our own kind get whittled down to size.

The book begins with what seems like seven short stories. The first story begins with Norwegian immigrants, the Hoels, who move to Iowa and plant a chestnut tree in their yard. The second story is another immigrant story. Mimi Ma's father puts too much stock on his mulberry trees but he does instill a deep love of nature in his girls. In the third story Douglas P. is shot at in the Vietnam War and is saved by an old fig tree which breaks his fall.  In the next story a young kid, Neeley, falls from an oak tree and his life is changed in an instant. Two other stories emerge and the reader will wonder at how the stories are connected. Up to this point trees are incidental in each story but in the seventh story we meet a girl, Pat, who loves trees and eventually grows up to study them.


As Dr. Pat Westerford she spends years alone in forests doing her research, initially mocked by her peers but eventually celebrated for an astounding (and actually real) discovery: A forest’s trees are all communicating, all the time, via a nuanced chemical language transmitted from root to root. As this revelation dawns, the reader is jolted with electric glimpses of connections among characters in the previous stories. (NYT)

In Powers' adept hands the stories interconnect but as Kingsolver says, their stories are mere shrubbery in the understory compared to the real protagonists with outstretched limbs in the overstory. Our characters all come together to try, often ineptly, in the defense of trees.

Lastly visit NPR for an interview with Powers. The author did a ton of research including moving to an area near an old growth forest as he wrote The Overstory. At one point in the book Adam, a psychology grad student, is asked if resistance efforts can make a difference. He says, “The best arguments in the world won't change a person's mind. The only thing that can do that is a good story.” Powers clearly believes that in order to change to consciousness of the peoples of the world we have to employ different techniques of persuasion and literature has a role in bringing about change. He said,


"There's a whole new kind of story that we're going to have to learn how to tell," he says. "We won't be dispensing with the social, or the political — not by a long shot. But to add in this environmental drama, that's going to be a marvelous task and a great source of meaning for the writers of the future."

There it is. The power of a good story to change the hearts and minds of a people. The Overstory is not an easy book to read. It is complex and at points confusing. The protagonists are really the trees. It is a long book but so worth the time and effort it takes to read it.

“There's a Chinese saying. 'When is the best time to plant a tree? Twenty years ago.' "
The Chinese engineer smiles. "Good one."
" 'When is the next best time? Now.' "
"Ah! Okay!" The smile turns real. Until today, he has never planted anything. But Now, that next best of times, is long, and rewrites everything.”

Go outside and marvel at a tree. And, if you can't find one, plant one. We can make a difference if we start NOW.

P.S. We have four BIG trees in our yard that we planted when we moved in a little over 20 years ago. I sat and marveled at the maple today, admiring how it has grown and filled in impressively just this past year. The best time to plant a tree is twenty years ago, the second best time is now.


-Anne
Posted by Anne@HeadFullofBooks at 8:22 AM