Review and quotes: PATRON SAINT OF NOTHING

The book I'm reading now (with a short review)... 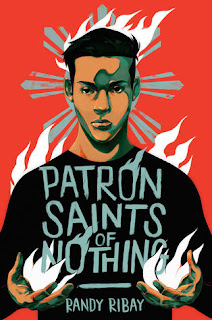 Title: Patron Saints of Nothing by Randy Ribay


It was a day of soil, sunlight, and smoke.


'Pasalubong for the balikbayan boxes,' he explains.

Comment:   The book begins with a memory of the last time Jay visits his father's family in the Philippines. He remembers all the details including the dead puppy and how his cousin, Jun, comforted him after he found it. The book also contains a lot of words and Filipino cultural references throughout. The quote from page 56 is an example how the Tagalog words are incorporated into the text. Here the father is preparing boxes of Costco goodies for Jay to take to his father's family when he goes to the Philippines in a few days.

Summary: Jay is Filipino-American, living with his parents and siblings in Michigan, when he learns that his cousin, Jun, was killed by Duterte's killing squads in the Philippines for being on drugs. Jay is certain that his cousin wasn't a drug addict and he wants to investigate what really happened so he asks his parents if he can go to visit the family in the Philippines in hopes of discovering the truth. He does learn the truth, eventually, but learns a lot about himself and his culture along the way.

Review: I have heard of Duterte and his killing squads through the news, but I didn't know that a majority of Filipinos support the killings because they believe that they are ridding the country of a terrible scourge. I also have many friends and relatives who have family in the Philippines so my interest was high to learn more about the culture and the Tagalog language. The hook, the mystery of what happened in the death of Jun, was a good tool for introducing many aspects of Filipino culture, words, foods, and history into the story.  For example, Filipinos have patron saints for everything, thus the title of book relates to the culture. In the end Jay learns much about himself and is able to look toward the future in a positive way. I recommend this book, which has earned three trade magazine starred reviews, to anyone who wants to learn more about the Philippines or likes reading about other cultures.

-Anne
Posted by Anne@HeadFullofBooks at 11:08 AM