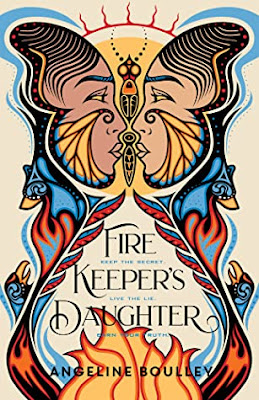 Part 1.
WAABANONG (East)
In Ojibwe teachings, all journeys begin in the Eastern direction.
Chapter 1
I start my day before sunrise, throwing on running clothes and laying a pinch of semaa at the eastern base of a tree, where sunlight will touch the tobacco first.

Saturday morning arrives with the same excitement as my former game days. Because of today's powwow, the Supes have an early morning practice.

Summary: Daunis Fontaine always feels like a bit of a misfit both in her hometown of Sault St. Marie, Michigan where she lives with her mother, and on the nearby Ojibwe reservation where her father's people live. When she was in high school she played ice hockey on the boy's team and hoped to continue playing in college, but now she has transferred her dreams to her future -- one involving science and medicine and not hockey. When she witnesses a murder, life crashes down around her, and all her dreams and goals with them. But then the new, cute member of the Supes hockey team, Jamie, approaches her with a deal -- to work undercover for the FBI to help figure out who is making the meth that is killing so many of the Native youth. Reluctantly Daunis agrees to go undercover using both her knowledge of chemistry and her interest in traditional medicine to guide her. At the same time she wants to make sure that the FBI isn't just interested in punishing the offenders, but also protecting the victims and their strong native traditions.

Review: Firekeeper's Daughter won the 2022 Printz Award for best YA fiction of the year. It was a timely read with a much needed focus on BIPOC rights right now. Daunis is a strong Native female protagonist who was unwilling to fall into the old tropes found in many books about white people knowing what is best for people of color. As she works undercover, she reminds the other agents over and over that the Native culture is good and the people are worthy of respect. Just because a person uses drugs doesn't make them bad or evil. In fact, several times she talks about the Seven Grandfather Teachings which are the principles of character that each Anishinaabe should live by. Love, Respect, Bravery, Truth, Honesty, Humility & Wisdom. Often Daunis would ask herself which grandfather did she need strength from on a given day.

The reading of the book about an Ojibwe tribe was also perfect timing for me personally. I had just finished reading the nonfiction book Everything You Wanted to Know About Indians But Were Afraid to Ask by Anton Treuer. Treuer is also an Ojibwe tribal member and though his book is not specifically about Ojibwe traditions he does give any Ojibwe examples in the question/answer format of his book. As I read Firekeeper's Daughter I kept looking for confirmation of what I had just learned.  For example, the book beginnings quote has Daunis laying down a tobacco offering (semaa) on the eastern side of the tree before she goes for her run. According to Treuer, "[M]ost Indians believe any spiritual request made of the Creator or one's fellow human beings must be "paid" for. Tobacco is viewed as an item of not just economic but primarily of spiritual value." The powwow that is mentioned in the quote from page 56 is an important cultural event for Native people with dancing open to all unless there is a special honor song limited only to specific people or family members. An example of that is the Jingle Dance which "is a special dance for Anishinaabe kwewag and kwezanswag, Indiginous women and girls who were murdered or missing. For each one ... Mikewendaagozi. She is remembered." Sprinkled throughout the book are Ojibwe words or Anishinaabemowin 'speaking the native language.'.

Several times in Firekeeper's Daughter people mention their allotment, or money they get just for being an enrolled member of the tribe. Getting free money causes some people to make unwise decisions about how to spend it and so tribal elders are always debating the merits of it. In addition some tribal members do not get the allotment because they are not enrolled members. This is also an issue that each tribe has to grapple with. I found it interesting how this issue made it into the story line of the plot.

Other tradition ceremonies were mentioned throughout the book in either passing references or in vivid details, such as the ceremony of the yellow pansy where women were able to release the pain that was suffered upon them at the hands of men. This was a very powerful and meaningful ceremony not only for the characters but for the readers. In her notes, the author, Angeline Boulley, says that she wrote this book because there are so few stories written about Native teens who are strong, positive protagonists. "The number of the women at the yellow pansy ceremony reflects the "all-too-real aspect of the story, the rampant violence against Native women. More than four in five (84%) have experienced violence in their lifetime..." But, Boulley goes on, "There is an important distinction  between writing about trauma and writing a tragedy. I sought to write about identity, loss and injustice...and also of love, joy, connection, friendship, hope, laughter, and the beauty of the Ojibwe community."

My reading experience: Helen @ Helen's Book Blog and I decided to do a read-along for Firekeeper's Daughter, dividing up the assignment into 150 page chunks. Since the book is nearly 500 pages long, it should have taken us three weeks to read and discuss in three parts. Well, that plan fell flat. As it happened the 150 page points seemed to coincide with a rise in the action every time, with the last 200 pages so thrilling and suspenseful it was impossible to stop reading and wait for the other to catch up. I was the slow poke but when I got to the break point I understood why Helen had to read on. Aside from it not working out to plan, our read-along was fun and kept me motivated to keep moving since I was reading several other books at the same time. Thanks, Helen!

Firekeeper's Daughter is one of those special books that don't come along that often. Read it. I know you won't be disappointed.

Posted by Anne@HeadFullofBooks at 9:47 AM