Summary: In June of 1954 Emmett is driven by the warden from the juvenile detention center to his home in Morgen, Nebraska. He has finished his sentence. But he is not coming home to the same situation he left. His father has died, the farm is foreclosed on, and he doesn't know what the future will hold. He just knows he wants to head to California with his younger brother Billy and start over. But before they can hit the road two other inmates from Salina, who hid in the trunk of the warden's car, show up and have other plans for Emmett: to take them to New York where they have hatched a plan to uncover a fortune.

Review: Based on the title of this book, The Lincoln Highway, one would think that the book will cover stories along the route from Nebraska to California with scenic "snapshots" of the bygone USA landscape along the way. Well, as it turns out there is not one mile taken by Emmett and his brother, Billy, westward toward their destination. Instead the two end up in New York City due to the plan hatched by Duchess and Wooley, escapees from the juvenile work prison in Kansas. And the route they take in the opposite direction isn't what they expected, either. 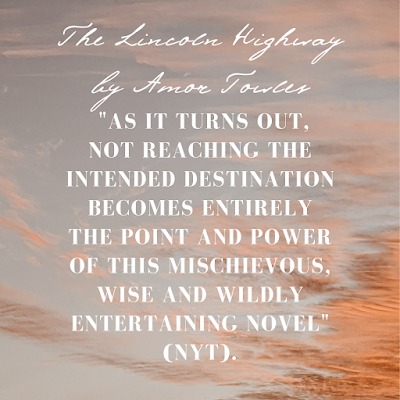 The novel is narrated by a whole cast of characters with only Duchess's chapters written in first person. There are several chapters by all four of the main characters but there are also chapters by Sally, Emmett's neighbor, also a teenager, who looked after Billy after their father died; Ulysses, a strong black man they meet during their journey to New York; Pastor John, another traveler, this one with bad intentions; and Abacus, a writer whose work has inspired Billy to look for heroes and adventure. The book, after all, is really about stories: the stories we tell ourselves and the stories that help us make sense of our world.

Weighing in at nearly 600 pages, The Lincoln Highway is remarkably buoyant. I found myself, however, expecting doom and gloom so would have to set the book aside frequently to avoid some action or another that I was sure would wreck the story for me. Those moments never actually arrived but Towles did a great job writing tension into the narrative. "Though dark shadows fall across its final chapters, the book is permeated with light, wit, youth. Many novels this size are telescopes, but this big book is a microscope, focused on a small sample of a vast whole. Towles has snipped off a minuscule strand of existence — 10 wayward days -- [to view under the lens of that microscope]" (NYT). And the dark shadows end up propelling the story forward to a possible future, full of other stories.

I listened to the audiobook, all 16+ hours of it and found it mesmerizing. As you can tell from this review, I absolutely adored the book and got completely wrapped up in the story, or shall I say, stories. If you haven't read it yet, I highly recommend it. Don't be put-off by the page length, just dive right in! If you have, what did you think of this, Towles' third book?

Posted by Anne@HeadFullofBooks at 1:39 PM