A super late review: PEOPLE OF THE BOOK 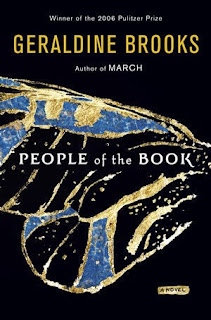 One of my book clubs, SOTH Ladies, has been meeting for over twenty five years. We formed as an adjunct group from our Women's Group at church and have been going strong ever since. For a look at our whole reading list, check out this megalist of titles. Obviously in that amount of time, some of those books have become quite cloudy in my memory, while others are very clear even though we read them years ago. Others linger in my memory because I loved the book or the good discussion we had. While others remain powerfully in my memory because I found their message to be particularly profound or important. People of the Book by Geraldine Brooks is one of those books. Unfortunately, I didn't write a review back when we read it in 2015, so I am rectifying that problem right now.

In the book's afterward, Geraldine Brooks explains how People of the Book is a work of fiction yet it was inspired by a true story of the Hebrew codex known as the Sarajevo Haggadah. It was likely created in Spain in the 1400's during a period when Jews, Muslims, and Christians lived together in relative peace. This particular Haggadah is unique because it is illustrated, where most Jewish holy prayer books were not. It likely belonged to a fairly well-to-do Jewish family who came under stress during the Spanish Inquisition. Throughout its known history the Sarajevo Haggadah was saved from destruction by two Muslims and one Roman Catholic priest. Around these few known facts Brooks made up most of the plot and all of the characters to tell the codex's story.

The title of the book comes from a term used by Muslims even today. According to WikiShia the term 'People of the Book' is an Islamic term for adherents of other religions whose prophets are considered to have a divine book or scripture intended to guide human beings. Specifically, in Islamic culture this means Jews and Christians.

Brooks' work is the story of a little prayer book that survived over many centuries because of help from other 'people of the book.' Building on the known fragments about the Haggadah, Brooks starts its story backwards: Beginning in 1992 when the codex went missing from Sarajevo, to the 1940's when it was hidden from the Nazis, Vienna in the 1890's, Venice in 1609, Catalonia during the time of the Spanish Inquisition, and finally at its beginning in Seville in 1480 where the illustrator lived and dreamed of a life of freedom. As manuscript conservator Hanna Heath uncovers mysteries of each clue left behind inside the codes -- a wine stain, a grain of salt, a broken and badly repaired binding, a single strand of hair, and an insect wing -- details of the lives of those who touched and owned the book are slowly revealed to the reader.

In a world which often feels frayed and nearly pulled apart by religious intolerance, People of the Book is a reminder that there are good people throughout the world who want to do the right thing, not just for people of their own faith but for mankind in general. Precious manuscripts, like the Sarajevo Haggadah, are often saved by people who are not interested in financial gain, but because they value the relic of our human history, and the enduring lessons each generation has struggled to learn for itself.

"The book has survived the same human disaster over and over again. Think about it. You’ve got a society where people tolerate difference, like Spain in the Convivencia*, and everything’s humming along: creative, prosperous. Then somehow this fear, this hate, this need to demonize ‘the other’ – it just sort of rears up and smashes the whole society. Inquisition, Nazis, extremist Serb nationalists… same old, same old. It seems to me the book, a this point, bears witness to all that” (195).

As I revisited People of the Book I recalled some aspects of the book were better than others. Hanna Heath's personal story, both past and present, is a bit of a distraction from the point of the book. But her story serves as a reminder that history is peopled with individuals whose lives are messy and complicated. Some of the gals in book club didn't care for the way the timeline unfolded backwards, but I found that aspect charming. In my opinion it was a perfect book for a Christian women's group to discuss because faith played such a vital role in the book's creation and salvation.**

*A time period when Jews, Christians, and Muslims lived together in relative peace on the Iberian peninsula, from the eighth century to 1492, when the Jews were expelled.

Posted by Anne@HeadFullofBooks at 4:34 PM

Email ThisBlogThis!Share to TwitterShare to FacebookShare to Pinterest
Labels: 2022 Reviews, Challenges, Past due reviews