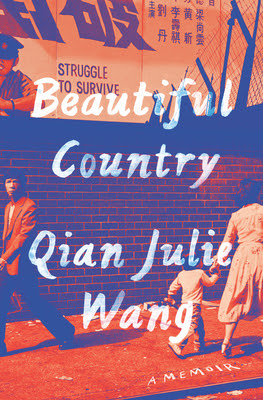 My story starts decades before my birth. In my father's earliest memory, he is four years old, shooting a toy gun at nearby birds as he skips to the town square. There he halts, arrested by the curious, swaying shapes that he is slow to recognize: two men dangling from a muscular tree.

I had many first days of school, and I didn't like any of them. On the eve of my first-ever day of school in Zhong Guo, when MaMa told me I would be starting school the next morning, I dissolved into a puddle of tears.

Summary: The story of Qian Julie Wang's life began when her father witnessed the beginnings of the Cultural Revolution that swept through China in the late 1960s. He not only witnessed the hanging of innocent men, his wholefamily became targets of the government's wrath after his brother committed some offense. Later when Qian's father was a professor he spoke out against the government and once more became a target. He knew it and fled illegally to the United States. In 1994 his wife, also a college professor, and daughter, Qian, followed him to the USA on visas set to expire way too soon. "My parents and I would spend the next five years in the furtive shadows of New York City, pushing past hunger pangs to labor at menial jobs, with no rights, no access to medical care, no hope of legality. The Chinese refer to being undocumented colloquially as “hei”: being in the dark, being blacked out. And aptly so, because we spent those years shrouded in darkness while wrestling with hope and dignity" (NYT).

Review: I should divide my review of Beautiful Country into two halves. The first half found me reading the book at the same time as I was listening to the audiobook Crying in the H Mart. Though the stories are vastly different they have some similarities -- Asian parents or mother; very strong mother-daughter bond; differences in US culture vs Asian culture -- so I found myself comparing the two. Beautiful Country took second place and my reading slowed to a trickle until the library checkout expired and I had to get back in line to complete the book.

The second half of my review starts when I get the book back from the library in January and this time I am not reading some other competing book. I am shocked by how vivid and touching the story is. It is horrifying to think about the way people are forced to live in the USA when they are trying to fly under the radar. Both parents, professionals in China, work menial job at below minimum wage. The family is forced to live in sub-standard housing shared by other immigrants, often eating what they can scrounge up or find in the garbage. Qian is eventually sent to school where her English is so bad they place her in a Special Education classroom where the teacher basically ignores her. Her only companions are the library books she devours as she teaches herself English. Eventually she attends a school intended for Asian immigrants where she is still met with comments from thoughtless teachers and bullied by classmates. But here, at least, she makes a few friends. The mother finally figures out how to get to Canada where the government is seeking help from educated immigrants. When Qian returns to the USA next time it is for college and for graduate school. Though it takes her many, many more years to deal with the trauma caused by her childhood living as an "illegal immigrant."

This is a powerful and eye-opening memoir. Qian said this about why she wrote the book: "I put these stories to paper for this country’s forgotten children, past and present, who grow up cloaked in fear, desolation, and the belief that that their very existence is wrong, their very being illegal. And I dream of a day when each and every one of us will have no reason to fear stepping out of the shadows."

Posted by Anne@HeadFullofBooks at 4:17 PM