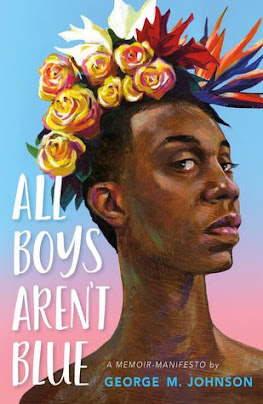 All Boys Aren't Blue is a YA memoir written by George M. Johnson, a LGBTQUIA+ activist. The story is about his young life as he grappled with an awareness of what made him different from his peers, siblings, and  cousins. Many of his memories are warm and wonderful while many are gut-wrenching and heart-breaking about growing up black and queer.

Unlike so many people, George Johnson grew up in a warm and supportive family dominated by his mother's mother, Nanny. She knew instinctively that George was different and took him under her wing. Her love and acceptance of George went a long was to launch him into the person he has become today. She said, "I love all of my grandkids, but I love each of you differently. Because you each need different things." George said that phrase "different things" part spoke to his soul.

The family may have been warm and accepting but the world often wasn't and George shares many stories, starting with getting his teeth knocked out in kindergarten at age six, when kids bullied or teased him in school. Kids can be so mean for the littlest infractions like pimples or frizzy hair, imagine how awful they can be to an effeminate boy. Throughout the book George explores the "intersectional identities in his own life by weaving questions of gender, masculinity, brotherhood, family, and Black joy throughout all this stories" (Book Jacket).

George decided he wanted to write this young adult memoir as a reassuring testimony for queer men of color, so that they can find a way to integrate themselves into a whole, perfectly designed person.