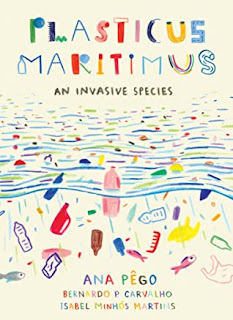 Plasticus Maritimus: An Invasive Species by Ana Pêgo is a very clever middle-grade book about plastic pollution in oceans. When Ana Pêgo, a biologist, was young her backyard was an ocean beach. There she became charmed by the beauty and variety of plants and organisms found in the ocean. Soon, however, she became alarmed by a new and invasive creature she named plasticus maritimus, better known by its common name: plastic.
The book is inspired by Ana Pêgo's life's work on the harmful effects of plastics on marine life and is beautifully illustrated with colored pencils by Bernardo Carvalho, making a tough subject seem more charming and accessible. Pêgo tells how plastics end up in the oceans, often starting in lakes and rivers, and tells of plastic's chemical composition and physical properties. Finally she calls for a revolution to do away with this artificial, invasive species with practical steps children, teens, and adults can do to make a difference in the plasticus maritimus problem we have right now.
I have often longed for this book without realizing it until now. When a problem is as big as this one it is hard to imagine making any kind of meaningful dent in the solution. Yet, here is a biologist who has very practical ways to help which include easy things like not buying q-tips made from plastic, not flushing anything made from plastic down your toilet, never using plastic straws, and finding alternative options to plastic bags. All stuff we've heard before but she tells us why. She even gives tips on how to help clean up beaches and how to dispose the plastic found there. Often books like this end up being about how we should pressure legislators to limit plastic consumption, which is a good thing to do, but this kind of advice usually falls flat on teens ears and one that transfers responsibility onto someone else. If everyone read this book and followed the steps in Pêgo's revolution we collectively could make a huge improvement toward the destruction of this invasive species.
What I liked about the book:

Source: E-book provided by the publisher.