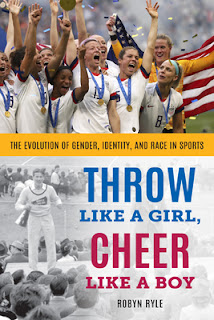 One of the best parts for me of judging nonfiction finalists for the Cybils Award is being 'forced' to read books like this, Throw Like a Girl, Cheer Like a Boy: The Evolution of Gender, Identity, and Race in Sports by Robin Ryle. In the past I may have a read a chapter or two of such a book most often if I was searching for some specific information. But now I reading these nonfiction books looking not only for content but also for good writing and a pleasant presentation of the information.

Robin Ryle is a writer, sociologist, professor of gender studies, and a sports fan. She has been teaching a class on gender, race, and sports for the past fifteen years at Hanover College in Indiana. She brings not only an expertise on the subject but also a passion.

Because the book covers a plethora of information on related topics I decided to outline the book for you brings out a few examples that really struck me.

"When Cheerleaders Were Boys" is the title of the first chapter. It deals with gender separation and what we think of as girl and boy sports. Surprisingly prior to WWII cheer-leading was done almost exclusively by men and often the men were athletes whose sports weren't in season at the time. At the time before the switch, therefore, cheer-leading was viewed as a very athletic endeavor. When women started cheering, the athletic nature of the sport was diminished and was often sexualized. Now men didn't want to do it any longer for fear of being viewed as homosexuals. With that introduction the rest of the chapter talks about differences in sports from a gender point of view and what Title IX has accomplished for women in sports.

The next chapter has to do with gender testing and the Olympics. It is a very current topic as public schools and universities grapple with how to treat trans athletes fairly. I am sure we will continue to hear more and more about this in the future.

Are men better athletes than women? Ryle uses several examples of how women who are given the opportunity and the training can be just as good or even superior to men in many areas of sports. I found it very interesting to learn that in the 1922 Olympics women performed at 30% slower than men but in the 1984 Olympics the differences were a little above 10%. Given the opportunity for good training and coaching, differences between genders are slight.

I found the chapter of sexuality in women's sports to be especially interesting. Great female athletes are often described in male terms---"tomboy', "mannish", even "muscle moll", which is a gangster term from the 1930s. If a female athlete today doesn't want to be thought of as a lesbian, she may do extra things to play up her femininity both on and off the field. Softball players may wear big bows in their hair as an example of this apologetic behavior. Black female athletes have an especially hard time navigating societal expectations with sports competitiveness. My daughter reminded me of what Serena Williams has had to go through that other tennis stars haven't had to. If she gets angry with a ref or complains about a bad call, she gets fined for being an angry black woman. There are so many double standards in sports and this is one of them.

The last three chapters have to do with cultural aspects of sports using examples baseball, cricket, and basketball, racism in sports focusing a lot of American football, and acceptance (lack of) of homosexuality in professional sports today. A lot of what I learned was both eye-opening and disconcerting.

One again, I wish I'd had this book back when I was teaching high school sociology. I think it contains the type of information that would have really interested my students.