Nonfiction review: THE NEXT PRESIDENT 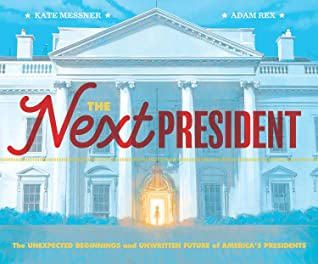 Kate Messner's The Next President: The Unexpected Beginnings and Unwritten Future of America's Presidents is the winner of the Cybils Award for Elementary Nonfiction!

On the first page of this engaging and inspiring children's nonfiction/information book the reader is asked this question: Who is the president of the United States of America right now? The answer, of course, is Joe R. Biden today but a month ago it was Donald Trump. There is always only one right answer to this question. But the question doesn't stop there because it asks readers to think about future presidents. We don't know their names now but there is are at least ten people currently living right now who will be the president in the future. That's something to think about, isn't it?

When George Washington was inaugurated as the first president of the United States there were nine future presidents living. Several were working in government, law, or medicine and a few others were just kids at the time, helping their families on their farms or going to school. When Kennedy was inaugurated in 1961 there were nine or ten future presidents alive, depending on if you include Barack Obama who was born later in the 1961. Both Biden and Trump were teenagers at the time.

Starting with George Washington the book takes us through all the former Presidents and what they were doing at the time when a past president came into office. There was a thread that Messner pulled through the story to see the connection between all these men. Then Messner asks the readers to think into the future. Who would make a good president. What kinds of things is that person doing now? Can they imagine themselves in that role. The book is very engaging and thought-provoking from that angle.

The Cybils Awards are judged not only on literary merit but also on reader appeal. This book has both in spades. The picture book quality will appeal to younger students in 3rd grade while the content will be useful for older elementary students who are starting to study our government and in support of their Social Studies curriculum. Librarians will find a lot of uses for this book to as they build themes and connections to other books.

What I liked about this book: 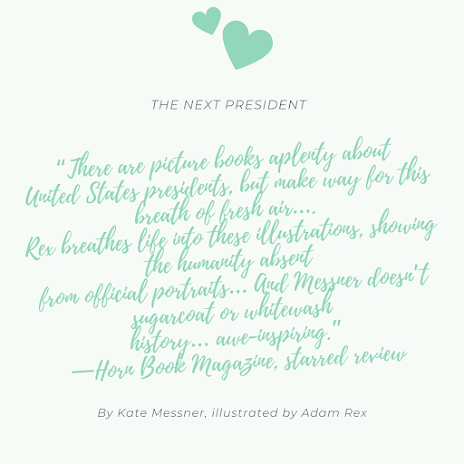 Source: E-book checked out from my public library.