Review and quotes: WHERE THE WORLD ENDS 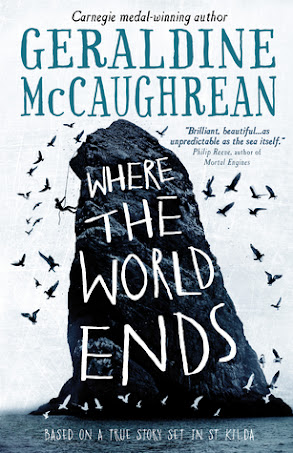 Title: Where the World Ends by Geraldine McCaughrean

Summary: In August 1727, eight boys and three men set sail from Hirta Island, the largest island in the St. Kilta cluster of islands and sea stacs---the most remote part of the British Isles. Their mission was to hunt and kill sea birds nesting on the Warrior Stac, located just a few miles away from their home by boat. Men and boys had been doing this task for as long as anyone could remember. Ordinarily the hunting trip lasted two or three weeks and then the hunting party would be ready to head home when someone from the village came to collect them and their quarry. This year no one came to get them and they ended up having to live on the stac in the middle of the North Atlantic for a whole winter. This really happened. But there is no record of what the boys and men did to survive and how they passed the time as they waited and hoped for rescue. Author Geraldine McCaughrean decided to make a story of their story. She said, "What you are reading is a true story...and there again, it's not. Fiction is elastic: it stretches to encircle true facts and then crimps them into shape to create Story."

Review: I listened to the audiobook of Where the World Ends read by Angus King. He read the words with a beautiful brogue, helping me hear the words that helped my imagination, allowing me to picture the severe setting where the boys were stuck on the edge of the British Isle. The cover illustration of the steep rock stac also made me aware of the bleak setting. At first the story seemed small and uninteresting but as the reality of the situation descended on the group it became much more complex and realistic to me. Think about what you know from history and what people in that time would do when they didn't understand something. There were no cell phones or any way of communicating their plight. Since they had no way of figuring out what happened, the members of hunting party decided that the rapture must have happened and the angels missed them since they weren't home at the time. Their religious faith was strong and the thought that the angels would remember them eventually but it also caused anxiety. What was taking God so long? The book really did build that tension. That along with the development of the complexity of relationships between the boys ended up creating a marvelous 'Story.'

I read this book as part of my Printz Award challenge. It won a Printz honor in 2020.

Posted by Anne@HeadFullofBooks at 9:55 PM