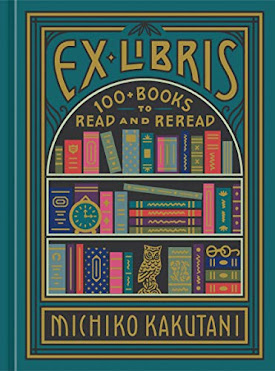 With Americanah, Chimanmanda Ngozi Adichie has written a wonderfully touching,, incisive, and very funny coming-of-age tale that's both an old-fashioned love story and a sharp-eyed meditation on race, class, immigration, and identity in our rapidly changing, globalized world.

Enduring classics speak not only to the circumstances of the day in which they were written but across the decades or centuries--uncannily anticipating our own experiences and world today. Such is the case of Albert Camus's startlingly resonant 1947 novel The Plague, a novel that can be read, in Camus's own words, as both a tale about an epidemic and as an allegory about the Nazi occupation of France and a "prefiguration of any totalitarian regime, no matter where."

Summary: Literary critic Michiko Kakutani shares her enthusiasm for more than 100 books and their talents authors. She includes in this list many novels, a few classics, and other works of fiction. She also includes memoirs, nonfiction choices including documents, letters, and speeches. Some books stand alone on the list while others are lumped together on a theme, such books of 'Muhammad Ali' or 'books by Saul Bellow.'

Review: My husband gave me this book for Christmas knowing how much I like books about books. I've read many, many books full of lists of titles of must-read books. The books listed in Ex Libris, by and large, were not listed in those books. There was not a Dickens or Austen title to be found. Several of the books were published last year or within the last five years. Several of the suggestions were political in nature. In fact, several times Kakutani would compare the text in the book to what is happening today in American politics even calling out Trump by name for his policies as examples for comparison.  Because there are so many books and titles I've haven't read (and in many case, heard of) it will require that I reread this book with a pencil to mark down all the titles I'd like to read eventually. Ah, so many books, so little time.

Americanah was already on my TBR list. Many book clubs have listed this as a good choice. I am pleased to see that it is funny. So many literary books aren't. The Plague on the other hand doesn't interest me. I had to read another book by Camus, The Stranger, when I was in high school in French. I hated it but it may be because my French language skills weren't very good. I must admit that The Plague does sound very prescient right now though. Few books screamed "Read me" with just one or two exceptions. One book that has completely captured my interest was Life by Keith Richards, Yes, that Keith Richards of the Rolling Stones. I wouldn't even consider myself a fan of Richards or his band but Kakutani makes the book sound like one that is surprisingly good. Another that I have been eyeing for several years is by Oliver Sacks, The Man Who Mistook is Wife for a Hat and Other Clinical Tales. If I didn't feel faint at the sight of blood I'm sure I would have considered a career in medicine. Now I just like to read about medical things and careers. And lastly, just to give this list of books some credibility, Kukutani closes out her book making sure we know how much she loves Dr. Seuss. No stuffy list of books here.

Source: My own print copy.