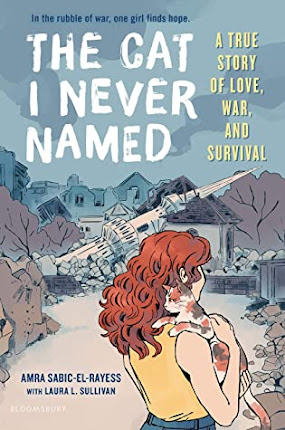 Of all the YA and MG nonfiction books I have consumed recently this one, The Cat I Never Named: A True Tale of Love, War, and Survival by Amra Sabic-El-Rayess, took me the longest to get into and to finish. That said, I have a feeling it will also have the biggest impact.

Amra was 16 when the war in Bosnia broke out. One day her Serb neighbors all disappeared from her town and the bombings started. Before that day she was just a normal high school kid worried about grades and thinking about her friends and if she would ever fall in love. The next day she and her family are fighting for their survival. If not for the sweet little stray cat who adopted her family, Amra is not sure that any of them would have survived. Throughout the book the little cat they call Maci, which is 'cat' in the Bosnian language, seems to appear at moments when the family needs her most: Amra's brother moves away from a corner just moments before it is bombed because he hears the cat meowing; Amra is brought back from a debilitating depression because of the cat's sweet disposition; Amra was supposed to be on a plane that crashes but isn't because of the cat's intervention.

So what was so impactful about Amra's story? First I couldn't help feeling guilty that I as an American wasn't paying close enough attention during the duration of the Bosnian War to even be aware that the Serbs intended to kill all Bosnians just because they were Muslim. Prior to now I didn't even realize that a genocide was taking place. Because of this book I've done a bit of research and discovered that the Bosnian War started after the breakup of Yugoslavia in 1992 and lasted for about three and half years, ending in December 1995. Over 100,000 people died during the war and 2.2 million people were displaced. There was indiscriminate bombing on civilians in cities who were also starving because food was not available or the world relief food was confiscated and never made it to the people like Amra and her family. Maybe as many as 50,000 women were sent to what Amra called Serbian 'rape camps'. Most of these women were Bosnian Muslims

Second, Amra Sabic-El-Rayess likens what happened in her country to what she see happening in the USA today with the hatred and divisions being allowed to grow and spill over into all aspects of society--- where one race of people are not given the same respect in the justice system or in society as everyone else. She uses this book as a warning to us. Her messages was powerful and heartfelt.

Yet, despite the horrors of war Amra finds some joy. She falls in love. Though she can go to school very few days in the school year, she enjoys the times she can be with her classmates and the challenge of learning new subjects like how to speak English. Later, amazingly, she earns a full ride scholarship to attend college in the USA. In her notes at the end of the memoir, Sabic-El-Rayess says, "I hope my story shows you how important education, teachers, schools are. Maci saved my life. Education gave me a new life."

I am not sure if teens will flock to read this book but I hope it does end up in some kids hands and can make a positive difference in their lives. I was thinking who I think would like this book. My mom, who is 91 years old, was the first person who popped in my head. Though it is marketed toward teens I really think it has broader appeal and adults will enjoy it, too.

Now a note about my slow start with this book. As I was racing to read the 21 Cybils finalist nonfiction books in five weeks I seemed to stall out on this one. On closer examination the book seemed to tap into some of my fears surrounding the coronavirus pandemic and issues related to the blind allegiance in Trump followers. When I muscled past those feelings and settled into the memoir and its superb writing, I was completely charmed. I also switched from the print edition to the audiobook. Hearing the correct pronunciation of names and places helped me relate to the story and picture the events better.

Sources: Print checked out from the library. Audiobook purchased from my Audible account.

Posted by Anne@HeadFullofBooks at 8:08 PM