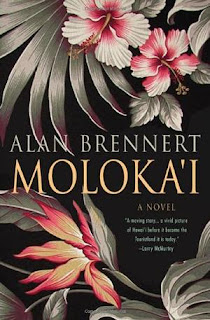 It is possible that our book club has just finished reading and discussing the perfect book club selection in Moloka'i by Alan Brennert. Feel skeptical? Let me explain why I think so.

First, the summary: Young Rachel Kalama lives with her big family in Honolulu in the 1890s.  At senven Rachel is diagnosed with leprosy and is forcibly removed from her family, first to a hospital compound in Honolulu and then, when she doesn't improve, to a leprosy colony on Moloka'i, a remote island in the Hawaiian chain. It is about 25 miles east of O'ahu. Rachel and her family had hoped that she could live with her uncle, who also had leprosy and was living on Moloka'i, but health regulations required that all unaccompanied minors live in a dormitory setting run by the Catholic church. There Rachel made friends with other little girls also living with leprosy and with Sister Katherine who became a lifelong friend as each of her friends succumbed to the disease. The book not only chronicles Rachel's life from the 1890 to 1970, but also the history of both the Hawaiian Islands and the history of leprosy treatment, later called Hansen's Disease. Rachel's life, though marred by disease, isolation, and unimaginable tragedy is also full of joy, courage, and dignity.

So why was this such a good book club selection? Well, first there was a ton of topics to discuss: colonialism; the Hawaiian monarchy; Hawaiian culture--which included religion, food, and words; the evolution of leprosy treatment; cultural and familial reactions to leprosy; Moloka'i; historical events like the invention of airplanes and WWII; childbirth and adoption; missionaries and the Catholic Church; friendship and family. This list is not exhaustive. I'm just giving you a smattering of topics covered in MOLOKA'I. These are the discussion questions we used and which beautifully opened up the text for us.

Our group selected Moloka'i, first published in 2003, because one group member asked a bookstore clerk for his recommendation since she rarely buys books and wanted to make sure she got a good one. Without a beat he recommended this book. I was interested in the book because I know little about this Hawaiian island and because as a child I encountered some people who lived in a leprosy compound in Africa, where my father was a missionary. I remember the disfigurements which have haunted my psyche for a long time. It was time to learn more about this terrible, historical disease.

Apparently Moloka'i has at least one sequel and an almost cult-like following for those who like historical fiction. Only one person in our group said they loved the book, most of us just 'liked' it and thought the writing to be just average. What was excellent was the storytelling about so many topics and the scope of the project. I listened to the audiobook so had the advantage of hearing the Hawaiian words and language pronounced correctly while the readers of the print editions had the benefit of being able to turn back pages to catch threads or characters missed on the first pass.

I am fairly positive that everyone left our book club meeting with a deeper appreciation of the book after the discussion than they had when they arrived. I know I did.

Posted by Anne@HeadFullofBooks at 11:01 AM