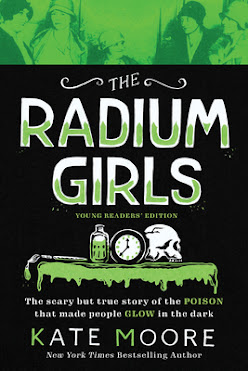 Title: The Radium Girls (Young Readers' Edition): The Scary But True Story of the Poison that Made People GLOW in the Dark by Kate Moore

Katherine Schaub had a jaunty spring in her step as she walked the brief four blocks to work...Today, she was starting a brand-new job at the watch-dial factory of the Radium Luminous Materials Corporation.

Blum was a balding man with a neatly trimmed mustache, spectacles, and a high forehead. As he introduced himself to Hazel and began his examination, he quickly realized that he had never seen a condition quite like this before. Her face was swollen with "pus bags" but it was the condition of the jawbone that was most perplexing. It seemed almost moth-eaten. It literally had holes in it.

Summary: Radium was the new cure-all at the beginning of the twentieth century. It was added to the American Medical Association's list of acceptable treatments for just about everything: cancer, nervous conditions, anemia, tuberculosis, toothaches, etc. It could also be added to paint which made it glow in the dark. Watch and clock-makers started using radium paint onto their dials and clock faces. Soon it became so popular to do this that radium companies had to hire hundreds of girls as dial-painters. In their orientation the girls were shown how to make a nice tip of the brush by lipping it. They would lip the brush, dip it into the radium paint, and paint over the number hundreds of times a day. "Lip-Dip-Paint" over and over. Before they started work many girls asked if the procedure was safe and they were assured it was perfectly safe, in fact they were told it would make them healthier, if anything. In addition to ingesting the tiny amounts of radium each time the girls lip the brush, no effort was made to protect the painters from airborne radium. Their skin, clothes, hair, and shoes would be covered by radium at the end of each workday and the girls actually glowed like otherworldly angels.

Not long after the girls started work at the radium company many noticed strange symptoms not common among people so young: horrible toothaches, achy joints to the point they could barely walk. The quick four block walk (Book Beginnings quote) soon became a torturous walk for Katherine. When Hazel another dial-painter went to her dentist, Dr. Blum could believe what he was seeing: holes in the jaw bone (Friday56 quote). Several girls died. Yet when the employees went to their bosses they were assured the paint was safe and there was no connection between their mysterious illnesses and their work. What these two girls, and all the others involved ,would find out is even more alarming---there is no cure for radium poisoning and no treatment for the symptoms.

The Radium Girls tells the unbelievable and true story of these women and their determination to fight back, ultimately winning in court after years and years of trying. Their win ultimately saved the lives of other people working with hazardous chemicals throughout the country. "The studies of the radium-dial workers form the basis of much of the world's present knowledge of the health risks of radioactivity. The suffering and deaths of these workers greatly increased [scientific] knowledge, ultimately saving countless lives of future generations" (341).

Because radium is radioactive for 1600 years, the bones of the radium girls in their graves will still set off a Geiger counter to this day.

Review: It has been a long time since I picked up a book that I didn't want to put down. The Radium Girls was one such book. I was mortified by the details of the medical horrors the radium girls lived through and yet I was encouraged by their resolve to do what was right not only for themselves but for others who weren't affected yet. There were hundreds and hundreds of these girls and the callousness with which the companies dealt with them was criminal. I became more and more grateful for workplace safety rules we have today because I am sure if it weren't for people like the radium girls who had to die due to negligence at work, we would be in the same boat today---the almighty dollar being more sacred than a life.

I've known a long time about the dial-painters and their radium poisoning but I had the facts all mixed up. I heard that they, out of innocence, got contaminated with radium because they painted on themselves thinking it was harmless. I supposed they thought it was fun to show up at a party and glitter and glow wearing the paint on their nails and their eyelids. I'm sure some of the girls did do that. But now I recognize I never heard the part of their story that involved ingesting radium paint through the lip-dip-paint method. I am so grateful for the impeccable research Kate Moore did to bring us the facts and then to write about them in a very readable narrative nonfiction format.

After I completed the book, my husband noticed that a movie called 'Radium Girls' was playing on Netflix. We watched it a few nights ago. It took a small portion of the book. It changed names, and consolidated information which make it not historically accurate, but it still told a part of the story of the radium girls and what they had to go through for some justice. The movie included information about the times like speakeasies, civil rights struggles for blacks, freedom to assemble, etc not mentioned in this version of the book. Since I did not read the adult book, Radium Girls: The Dark Story of America's Shining Women, which was published in 2017, I don't know if some of that story was included in the book or if it was just added for interest by Hollywood.

Source: Print version checked out from the public library.