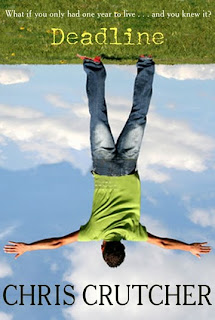 What if you only had one year to live...and you knew it? Ben decided not to tell anyone. He just wanted to have the best senior year possible.  He wanted to experience things he'd never done before without others holding him back because he was ill.  So he goes out for football even though he weighs less than 130 pounds and has only played with his brother, also a senior, in the back yard. He talks to and actually starts dating the hottest girl in the school.  He is bold and fearless.  He reads voraciously and challenges teachers to think outside the box.  Along the way he learns that love means you can't leave people out without consequences.  He eventually faces this and comes clean with everyone about his illness.

Lest you think that this is just a sob story---think again.  It is about our education system, about the power of books, the effects of book banning, about First Amendment rights of free speech, what we are taught in our history classes and why.  It is well written, thoughtful and will appeal to both male and female readers.

I decided to read Deadline yesterday.  It was a lovely day in the Northwest so I sat outside with an iced tea and read the book all day. It was a quick read full of thoughtful an poignant parts many of them spiritual in nature but it has enough about football in it to keep even the biggest jock interested.  I will definitely read more Crutcher in the future.  He tackles (pun intended) topics that need to be addressed but doesn't come off as being preachy.  One of my favorite parts of the book was in chapter 12 where Ben is insisting that the Civics teacher allow him to do a project on Malcolm X and Sylvia, another student, pipes up that the teacher should discipline Ben and that the book he is reading should be banned. What ensues is an excellent, hands-on lesson that teaches kids more than whatever the teacher had a paper to do that day.  Read it and see if you agree with me.

Here is a favorite quote:
"God isn't a guy.  God isn't a girl. God is a force.  You have all these people trying to figure out whether to believe in God or the Big Bang. Well, God IS the Big Bang.  If God relegated his thinking to human cognition, it would never get anything done...Just know that everything started as one, everything still is one, and it will end up as one."  ---Hey-Soos to Ben in dream, p. 241-2

Visit Chris Crutcher's Page to read more about Deadline.
Posted by Anne@HeadFullofBooks at 9:59 AM