Summary of the book and a review to follow--- 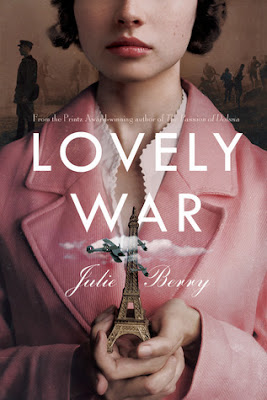 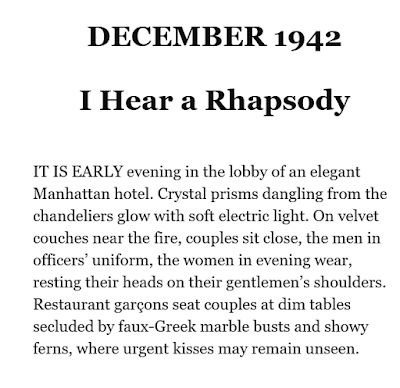 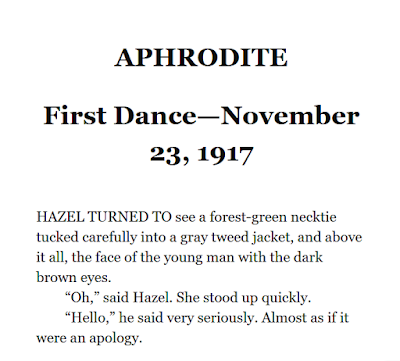 
It's 1917, and World War I is at its zenith when Hazel and James first catch sight of each other at a London party. She's a shy and talented pianist; he's a newly minted soldier with dreams of becoming an architect. When they fall in love, it's immediate and deep—and cut short when James is shipped  off to the killing fields. //Aubrey Edwards is also headed toward the trenches. A gifted musician who's played Carnegie Hall, he's a member of the 15th New York Infantry, an all-African-American regiment being sent to Europe to help end the Great War. Love is the last thing on his mind. But that's before he meets Colette Fournier, a Belgian chanteuse who's already survived unspeakable tragedy at the hands of the Germans. //Thirty years after these four lovers' fates collide, the Greek goddess Aphrodite tells their stories to her husband, Hephaestus, and her lover, Ares, in a luxe Manhattan hotel room at the height of World War II.

Review:
Lovely War addresses the age old question, 'Why are love and war inextricably bound together?'
When Aphrodite, the Greek goddess of love, is accused by her husband Hephaestus of taking a lover in Ares, the god of war, she tells the story of the four lovers from the Great War over twenty years earlier. She asks Apollo, Hades, and Ares to add to the story as they crossed paths with the lovers themselves. Music, death, and war were all intertwined in the love stories.
At first I was critical of gods and goddesses telling the love stories of the two couples who met during WWI. Having the gods as narrators felt like an unnecessary schtick. Weren't the love stories enough? But as I thought about it, I realized the author wanted to do more, she wanted to show the connection between war and love. It's about relationships that never would have happened under regular circumstances but they grow and bloom quickly in time of war.
I enjoyed the love stories between Hazel and James; Aubrey and Collette. I didn't really pay attention to the drama between the gods and goddess. But what I liked best was the parts of the story that Berry took from history---about the 'negro' infantry called the Harlem Hellfighters and the band leader James Reese Europe, whose band took ragtime to Europe. Ragtime was the precursor to jazz and the war provided a chance to spread this very American music abroad. This was all news to me.
I loved Julie Berry's The Passion of Dolssa so I had high expectations for Lovely War. I wasn't disappointed by the writing, I just didn't enjoy the story as much as Dolssa. I really do recommend this book to anyone who likes historical fiction and to someone who likes to learn new information.

Anne
Posted by Anne@HeadFullofBooks at 5:30 PM