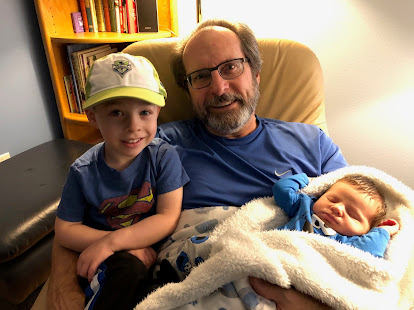 Weather: We have had rainy, cold days the past few days. The weather report for the coming week, however, is for warmer, drier days.

Family News: Our new grandson is making a home in our hearts. Above is a photo of grandpa with his grandsons.

Still sad and mad about the death of Ruth Bader Ginsburg and about Trump announcing her replacement, an ultra-conservative. Listen to this speech made by Senator Amy Klobachar after Sen, Ted Cruz justified the GOPs decision to replace RBG now and their hypocrisy. Klobacher is full of righteous indignation.

1. This opinion piece titled "Americans are finding out this emperor is naked, and his private parts are not impressive," helped me make it through the week. The author talks about the ways Trump is trying to steal the election and how others will not let it happen. (Dkos)

2. 489 National Security leaders for Biden. Read their statement published in an open letter here. It is fairly brief so I really recommend that you read it all (plus it will give you talking points if you have a chance to inform another voter about Biden's good qualities.) It ends with this, "Joe Biden has the character, principles, wisdom, and leadership necessary to address a world on fire. That is why Joe Biden must be the next President of the United States; why we vigorously support his election; and why we urge our fellow citizens to do the same."

3.  The FDA has finally come out with a statement that the process for approving a coronavirus vaccine will not be politicized. Trump is not happy with them, of course, but at least we know that if and when a vaccine does arrive it won't be rushed in the process. 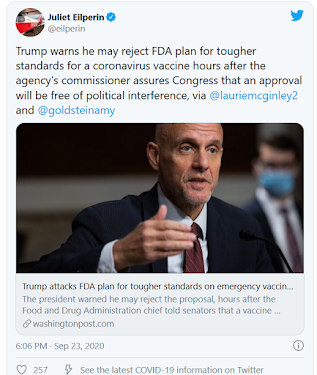 4. As you know, Biden's polling numbers look good, giving Democrats reason to hope. This week the Institute of Politics at Harvard Kennedy School reported a Youth Poll (voters aged 18-29) and found the youth support for Biden very high, near the number that Obama got in 2008. 60% support Biden while only 27% support Trump. For contrast, Hillary only got 49% of the youth vote in 2016. And state numbers are looking good, too. Check this out from Georgia: 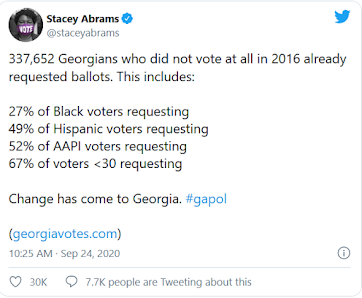 5. The US Postal Service is undoing all the slow-down measures they recently did and will prioritize election mail. "Ready to deliver Election mail to the nation. Sept. 24 Stand Up memo." The memo was leaked to the press.

6. As you may know Trump is actually talking about a coup if he doesn't win on election night. Here is an excellent article that everyone should read about ten things we can do to stop the coup. (Waging Nonviolence.) After reading the list, sign the pledge (below) at Choose Democracy.

7. Bernie Sanders is very precise about what needs to be done to make sure we have a peaceful transfer of authority in November. Here is a clip from the excellent speech he gave on Thursday this week. For the full speech click here.

8. On a completely unrelated topic, I found these articles so interesting about the value of forest fires. It has been such a horrible year for all the fires in the West but it is good to know that positive things may come from them. Here is the sentence that really got me: "Two years ago, a wildfire that swept the western Columbia River Gorge appeared to be a disaster. Instead, it turned out to be a miracle." (Willamette Week) And another article talks about how forest fires have saved an endangered woodpecker species. (GNN) 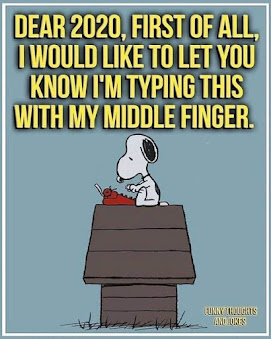 2. I've wondered this myself about Trump and his rhetoric... 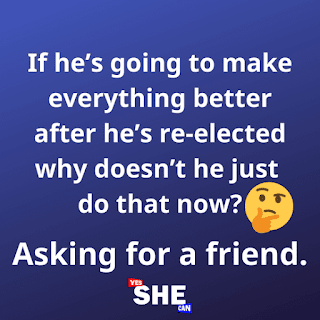 3. I think this cartoon needs wide distribution. Trump and the GOP are doing a head-fake and people aren't paying attention to what they are doing about Social Security and health care. 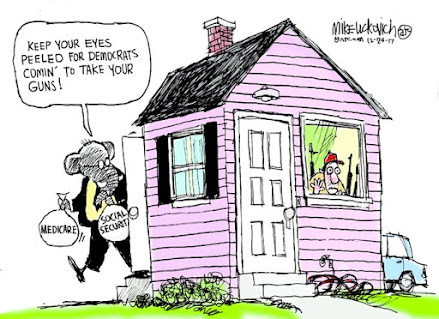 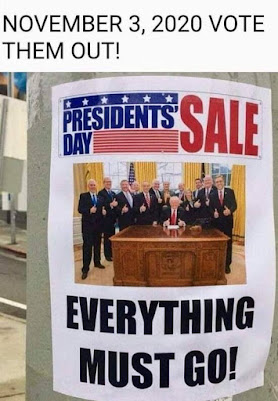 5. This book it is called There's a Monster at the End of the Book. (Contributed by my daughter and sister.) 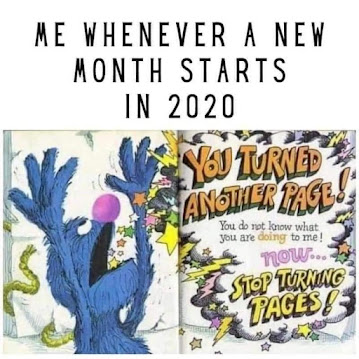 6. Ever feel like all of the GOP talking points show us how selfish they really are? 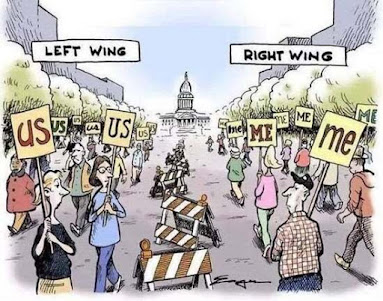 I want to know you were here reading this post. Please leave a comment about your thoughts, even if they don't match up with mine. Thanks so much.

Posted by Anne@HeadFullofBooks at 9:38 AM