Friday Quotes and a look at the works of an author: A.S. King, updated with brief review

A summary and review of the book as well as a look at other works by the author to follow the quotes.... 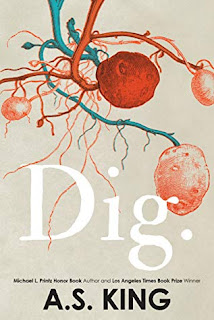 
The Shoveler, the Freak, CanIHelpYou?, Loretta the Flea-Circus Ring Mistress, and First-Class Malcolm. These are the five teenagers lost in the Hemmings family's maze of tangled secrets... As the rot just beneath the surface of the Hemmings precious white suburban respectability begins to spread, the far flung grand children gradually find their ways back to each other, just in time to uncover the terrible cost of maintaining the family name.

Review: (NEW) At its core Dig, a deep and confusing surreal novel, confronts the reality of a family who is deeply poisoned by racism. Poverty, hatred, family violence, and disenfranchisement are the results. Each character, most we don't even know their names until late in the book, confronts the parent for the ugliness and scars left behind from the horrors of racism. One questions the information in textbooks as biased and racist, another thinks that blood from a black person is different than blood from a white person, another uses her friendship with a biracial boy as a way to get back at her mom, while another boy is befriended by a man during the winter so he doesn't see his racist tattoo until spring when the coats come off. The poison runs deep and destroys a family from the inside out. King, in the author's notes, asks readers to confront racism in all its forms, many we never even think of as problems. The surreal text sets the issue on its edge, causing the reader to look at the problem in a new way.

King is a brilliant writer, so sharp and precise at getting her points across in a new way. Where all of her books attack problems from a unique vantage point, this one really highlights the issues of racism and its many ugly tentacles.

This will be a difficult book to recommend because it is so weird, so surreal. But if the reader is patient, the disparate parts come together and there is definitely a feeling that the characters, so hopeless in the beginning, may be able to DIG (get it?) out of their situation and a brighter future is on the horizon.

Other works by the author and a few of my thoughts:


I've read six other books by A.S. King. This is almost unheard of for me. I rarely stick with one author through so many years and books. I have loved her works from the very first book and every time I read one I feel like my socks are knocked off, her writing is so good. But, and this is a big BUT, all of her books are very similar. Let me explain. 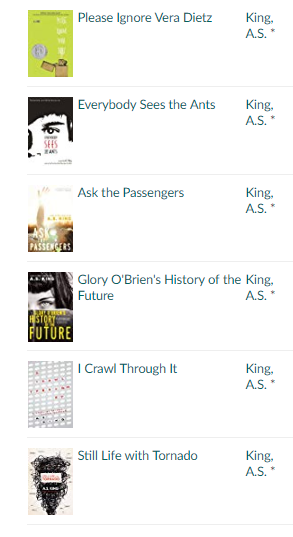 Please Ignore Vera Dietz. I read this book in January 2011. It won a Printz Honor that year. The book just blew me away how King used movement back and forth in time to tell the story of a girl whose best friend, Charlie died under questionable circumstances. She covers up her grief with alcohol and with busyness. At times the reader is led to believe that Vera is going to have, or has had a mental breakdown. This was my first A.S. King book and the first blog review I was truly proud of. I read it too late to add to my Mock Printz list of selected titles for 2011 but each year after that , for several years we added her subsequent works onto our list hoping King would be a repeat Printz winner.

Everybody Sees the Ants. I read this in October 2011 and promptly added it to our Mock Printz list for 2012. It didn't win any actual awards but had an important message about the detrimental aspects of bullying and how things can improve if one takes action. But to get to that point the main character, Lucky Linderman, has to have lots of interactions with his grandfather who was a war hero and who is dead. Once again mental health issues play a prominent role in the plot.

Ask the Passengers. Read in late December 2012, I was a bit lukewarm on this book compared to the other two. It felt like a too familiar trope to me: Girl (or boy) questions her sexuality, people find out, tease and bully her (him), which causes a crisis of self-esteem. In this book, like others, this character talks to people who aren't in the room---passengers on airplanes high in the sky and certain long-dead philosophers. Mental health issue or just a crisis of identity?

Glory O'Brien's History of the Future. A November 2014 read. By the title, this book promised to be different than the other three, with a Sci-Fi aspect to it, I thought. It is about a girl whose mother committed suicide when she was young and she fears that her destiny may hold the same thing. Until one day she starts having visions of a disturbing future and she decides to write down her visions and do her damnedest to make sure these things never happen. Apparently I never reviewed this book, which was on our Mock Printz list and won the Walden Award, given out by English teachers. But on my notes of many books written at the end of this year I said this about Glory O'Brien's History of the Future: "A.S. King is a kick-ass author. All her books are so good, yet recently they seem to have formed an amalgamative mass of gel in my brain and I can't remember which story is which. Glory O'Brien's History of the Future just isn't clear in my memory anymore." This book WAS different. Were the visions brought on by mental illness or was it a true Sci-Fi book? Note---I am definitely picking up on a theme to King's books.

I Crawl Through It. Read in November 2015. I had to reread the summary of the book to recall deails but what I did remember was how weird this book was and how full of symbolism it was. This is perhaps the most surreal book I've ever read. In fact, I added it to the Mock Printz list that year, thinking it might win an award because it is so different. Four teens are stressed to the max and the adults in their lives aren't paying attention. One turns herself inside out, another splits in two, while another can actually see the invisible helicopter her boyfriend is building, but only on Tuesdays. Call it PTSD or mental illness, but the teens are definitely in trouble.

Still Life with Tornado. Read in November 2016. Sarah drops out of school when her art teacher says that nothing new is ever created but only redone. She looks for creativity to prove the teacher wrong. During her search she finds her younger self and an older version of herself. From each she gains some wisdom into her current circumstances but it isn't until her mother gets activated that Sarah is able to reintegrate all the broken pieces of herself.

Though I've read most of A.S. King's books I did miss two YA titles along the way: Reality Boy (2013), and The Dust of 100 Dogs (2009). Now that I've read Dig I might reach back and give them a try. My favorite of the six is Please Ignore Vera Dietz, the first I read. I feel like I am forever chasing that book to find a new favorite by the author. You can tell from my summaries that each one has something to do with mental illness or a surreal representation of things falling apart. After adding her books to our Mock Printz list every year, we stopped in 2016 because we felt the real Printz committee would also note the similarities in themes and move on to other authors exploring a wider range of themes in their books. Either way A.S. King is a remarkable writer and I can't seem to get enough of her books.