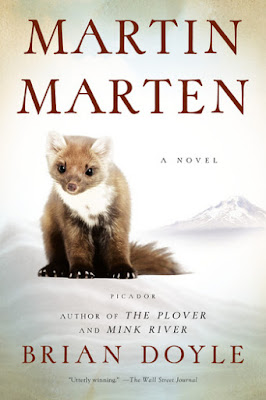 I grew up in Oregon and lived in the Willamette Valley. My grandparents lived in Bend on the eastern side of the Cascade Mountains. I became very familiar with all the passes across the Cascade mountain range. One route from Portland on Hwy 26 takes drivers right past Mt Hood en route to the east side of the state. Right after the village of Rhododendron is a small community named Zigzag, both being part of the villages of Mt. Hood, known as the Hoodland Corridor. I remember driving through Zigzag thinking it was such a funny name for a village, not even realizing it was named for the Zigzag River, a tributary of the Sandy River which eventually joins up with the mighty Columbia River on its march to the sea. I often wondered what kind of people would live in such a place. Now I know.

Martin Marten is set in Zigzag, which seems like a fun and quirky setting for a story about a boy, David, who is coming of age on the mountain, as is a young pine marten, named Martin. The boy and the marten live separate lives, though their paths cross several times in the story. This is not one of those cutesy books where a wild animal comes to live with humans, or vice versa. Rather it is a story set on the edge of civilization with a whole host of quirky characters, both human and animal.

There is 14-year-old David who lives with his parents and his precocious  6-year-old sister, Maria. Dickie Douglas, the trapper, who knows the mountain like the back of his hand. Miss Moss, the storekeeper and community know-it-all. Cosmos, the crazy bike rider who always wears orange suits. And Moon, David's best friend, whose parents work in the high-tech world which is the exact opposite of the rest of the folks in the story. Many of the characters are unnamed, including David's parents.

There are also odd animal characters, none of them talking. Besides Martin, the pine marten, there is the largest elk bull ever seen named Lewis, a wise old horse named Edwin, a silver fox, an old mountain lion with a huge territory, and a dog who lives with a man, but the man does not own him.

David loves nothing more than exploring his part of the mountain and running along its trails. It is here that he bumps into the pine marten, Martin. Martin enjoys running also and often accompanies David on his runs through the forest, but he does his running in the trees. At one rather dramatic point in the story, Martin plays a critical role in the safety of Maria.

Aside from the aforementioned scene, most of the book is made up of moments in the lives of the characters without a bunch of drama, though life on a mountain can be very hard for both humans and animals.  Author Brain Doyle, an Oregonian, has obviously done his homework on the flora and fauna of Mt. Hood, called by its Indian name in the book:Wy'east, and I learned quite a bit about animal life especially, which I found very enjoyable. My husband and I listened to the audiobook as we drove to Canada and back last week and we both enjoyed the story but didn't find it especially riveting. At one point, after we were restarting the story after a stop, my husband remarked that he didn't remember where we were in the plot. We decided to just figure it out as we listened without backing up for clues. We knew we wouldn't miss much.

I read the book for an upcoming book club. It was part of a library book club kit, which means that some librarian thought this would make a good discussion book. I hope we do have a lively, quirky discussion to match the book. (Discussion questions here.) I just learned that the author Brian Doyle, died recently at a age 60 and was eulogized by many in the writing world for his skills. Watt Childress, of Juniper books, said that Doyle "relayed stories like prayers" and compared his writing to the music of Van Morrison because it was so lyrical. Doyle is quoted in the same article as saying that writing is just "talking an idea for a walk." What a perfect way to sum up this book. Doyle, just took his characters for a walk around Wy'east and voila!


Posted by Anne@HeadFullofBooks at 11:50 AM