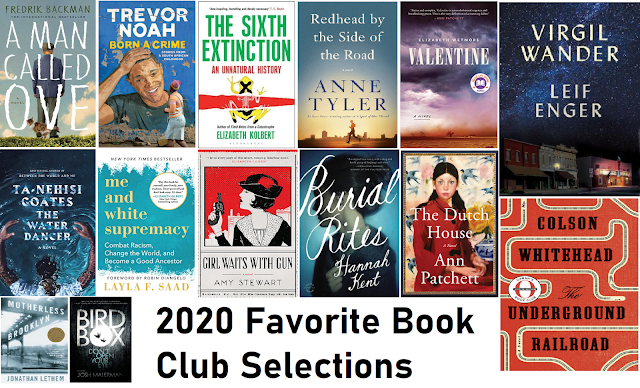 2020 was not only a strange year because of the coronavirus quarantines, contentious politics, and completely bonkers weather. It was a strange year for books and reading, probably because of the above mentioned situations. I am in two book clubs so technically I should read 24 selections each year for my club meetings. This year was only 17 or 18 titles. Both clubs went through attendance spasms throughout the year. Should we meet in person (outside or in my garage with the doors open), on Zoom, or skip it were the questions we asked each month? Apparently "skip it" was pretty common as, it seems. Zoom was not a popular option for either club.

I am using this post as my Top Ten Tuesday post, in lieu of today's topic about books I am looking forward to reading in 2021.

Click on hyperlinked titles if you want to read my reviews.

1. Virgil Wander by Leif Enger---this book was a delight to read and a delight to discuss. Part of the discussion focused on the wordsmithery of Enger. Read my review, please, you will see what I mean as I included a few quotes in it. (RHS, January, in person)

2. The Underground Railroad by Colson Whitehead--- Initially read in 2017 for one book club, the second club read and discussed this amazing Pulitzer Prize winner this year. Whitehead wrote the book with this premice: “WHAT IF the underground railroad was a literal railroad? And what if each state, as a runaway slave was going north, was a different state of American possibility, an alternative America?”  If you haven't read this book with your club, move it up on your list! (SOTH, February, in person)

3. Born a Crime: Stories From a South African Childhood by Trevor Noah---Even those gals who weren't that familiar with this comedian enjoyed the book and and discussion we had about his early life in South Africa. We were all shocked that it did not focus on his fame at all. (RHS, October, in person)

4. A Man Named Ove by Fredrik Backman---I also read this book originally in 2017 and apparently didn't write a review for it at the time. If I asked, I am sure that club members would identify this book as one of their favorites. If you aren't familiar with this author, introduce yourself. He is amazing.  (SOTH, January, in person)

5. The Sixth Extinction by Elizabeth Kolbert---There are have been five great extinctions on earth throughout history. We are currently involved in the sixth one, the only one that is man made and possibly reversible if we act soon enough. this book talks about the first five extinctions and then shines spotlights on what is happening right now among amphibians, bats, rhinoceros, etc. It was a tough read but everyone was grateful that we decided to tackle it. (SOTH, October, in person)

6. Redhead by the Side of the Road by Anne Tyler---It seemed that everyone in the club liked this book which addresses how we as people view ourselves and what is important in life. The main character is quirky but very likable. (RHS, September, in person)

7. The Dutch House by Ann Patchett---I loved this book which is about a brother/sister team and the house that they love and yet feel trapped by. This book would be higher on the list if not for the meeting, our first Zoom club meeting, which abruptly ended when we ran out of time. Sigh. (RHS, March, Zoom)

8. The Water Dancer by Ta-Nehisi Coates---Another story about the underground railroad which also employs some magical realism but enough realism to make the slavery circumstances just as disgusting as they were. The discussion suffered from Zoom challenges (lag time, people talking over one another, poor or slow Internet) but the timeliness of the topic was perfect when our nation was in spasms due to the death of George Floyd at the hands of the police and the Black Lives Matter rallies. (RHS, June, Zoom)

9. Girl Waits With Gun by Amy Stewart---This book, and the others in the series, was the all-Pierce Reads! book with a big meeting planned with the author in mid-March. Well, the big meeting with the author was canceled and so was our book club due to the coronavirus. When we finally did get together months later, everyone who attended seemed to really like the book and several gals had actually read all the books in the series, since they had time. What is especially fun about this book is that it is based on a real woman who was the first female sheriff's deputy in America. (SOTH, March meeting postponed to June, in person)

10. Me and White Supremacy by Layla Saad---This book was available for unlimited e-checkouts through the library. That is why we picked it. The timing of reading it was perfect as white Americans were all trying to figure out how we can move closer to becoming anti-racist. We had a fabulous discussion, even a little prickly due to the topic, but there was too much material in the book to be covered in one club meeting. If you choose this one, set aside three or four club meetings to tackle it. (SOTH, July, in person)

11. Valentine by Elizabeth Wetmore---This book should come with a gigantic trigger warning since it opens with a horendous rape scene. Set in dry, dusty West Texas the story circles around the lives of women who are trying to make it in a world dominated by men. We had a powerful discussion. (RHS, August, in person)

12. Burial Rites by Hannah Kent---Set in Iceland in the 1800s. It is the story of the last person killed with the death penalty in Iceland before it was no longer allowed. The setting is so cold and bleak and the story so sad no one really liked the book. But I have to give a shout-out to the author for all the research she did and for the amazing writing.  (RHS, May, Zoom)

A.  Bird Box by Josh Malerman---This is a strange book club selection. It is in the horror/thriller genre and I was sure that all the ladies in my group would be mortified by it. But actually most people liked it and we had a pretty good discussion about not only the story-line but also the writing techniques used by the author. (SOTH, September, in person)

B. Motherless Brooklyn by Jonathan Letham---I am a big fan of this book, which I reread for book club this year after reading it the first time over ten years ago. I spaced out and missed book club which was super disappointing to me because I was ready to do battle with those who said they didn't like it. (RHS, February, in person)

Looking for more suggestions?  Click the links to check my past lists:

Posted by Anne@HeadFullofBooks at 9:21 PM