Review and book discussion: ME AND WHITE SUPREMACY 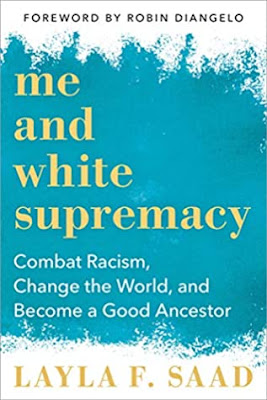 Back in 2018 Layla F. Saad hosted a 28-day Instagram Challenge called 'Me and White Supremacy.' Every day for a month she posted a topic related to the title and asked participants to journal about it, to do the necessary and vital work toward improved race relations. In January of this year the book Me and White Supremacy: Combat Racism, Change the World, and Become a Good Ancestor was published by Sourcebooks, expanding on the original challenge.


This eye-opening book challenges you to do the essential work of unpacking your biases, and helps white people take action and dismantle the privilege within themselves so that you can stop (often unconsciously) inflicting damage on people of color, and in turn, help other white people do better, too.---from the publisher

My book club, which has been in existence for nearly twenty-five years and made up exclusively of old white ladies, decided to read this book for no other altruistic reason than its e-version was available for unlimited checkouts from our library. Everyone could check-out a copy of the book from the comforts of their own home for free. We typically use the library book kits but those weren't available due to the coronavirus pandemic. With the death of George Floyd and the Black Lives Matter demonstrations it was a timely selection.

As the day for the book club (socially distanced, wearing masks) approached I searched around for discussion questions. I didn't find any. The book was stuffed with questions itself but we didn't have enough time to discuss each of them. I had to narrow it down, so I generated a list of questions myself as conversation starters and hoped I was up for the task of guiding the discussion in a meaningful way.

Right off the bat things got off the rails. One gal said she had trouble with the book because she felt accused of racism and she "is not a racist." I couldn't remember if I read the definition of racism in this book or one of the other books I've recently read on the topic. Eventually I pulled up Merriam Webster which is in the process of changing the definition. “Racism is not only prejudice against a certain race due to the color of a persons skin, as it states in your dictionary. It is both prejudice combined with social and institutional power. It is a system of advantage based on skin color” (NYT) Having this new definition in mind was critical for our discussion. We are all racists in a way because we are part of the 'social and institutional power' structure which has held blacks down for 400 years in our country. And as our discussion proved a lot of that is unconscious but definitely in play.

As we more or less bumbled along trying to tackle each question, I  became more and more convinced that having one club discussion over the book was a terrible idea. There were too many new ideas and so much new terminology for us to digest in one setting together. At the end of the book Layla F. Saad suggested that people who want to do more work toward becoming 'good ancestors' join a group (Circle groups) and meet regularly to discuss the variety of topics introduced in Me and White Supremacy. That seems like a much more likely opportunity for making real change than meeting once for two hours at my house in a book club setting. We tried and did our best. We want to do more, but I fear our book club meeting was not enough.

Here are the questions I used:

-Anne
Posted by Anne@HeadFullofBooks at 9:43 AM