Review and quotes: SO BIG by Edna Ferber 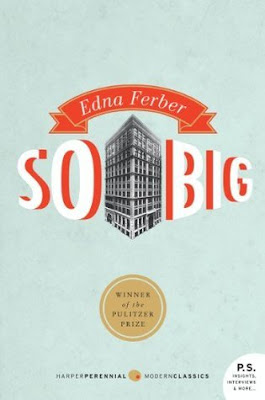 Title: So Big by Edna Ferber


Until he was almost ten the name stuck to him. He had literally to fight his way free of it. From So Big (of fond and infantile derivation) it had been condensed into Sobig.


It was shortly after noon that High Prairie hearing the unaccustomed chug of a motor, rushed to its windows or porches to behold Selina DeJong in her mashed black felt hat and Dirk waving his battered straw wildly, riding up the Halsted road toward the DeJong farm in a bright red automobile that had shattered the nerves of every farmer's team it had met on the way.

Summary: Selena DeJong, née Peake, always has dreams of being an artist of some sort. But when her father dies she is abruptly left with no money and few prospects. To get by she becomes a teacher in a small Dutch community near Chicago. Within a year she falls in love and marries a farmer. Now all of her dreams of an artistic life are thrown out. Survival is the name of the game now. But she does encourage a neighboring boy to follow his artistic dreams and when her son Dirk, called Sobig, goes off to college to become an architect, she is thrilled. But dreams of an artistic life verses making a living often can't coexist, as both Selena and Dirk learn. Both end up disappointed with where they end up.

Review: A few years ago I decided that I wanted to read a bunch of the Pulitzer Prize Award winners from past years. Not all of them, but just the ones that sounded good to me and that seemed to have stood the test of time. I based my decisions on, in large part, if I had heard of the book or the author before. I also checked the library to see if the book was even still in their collection. SO BIG came to my attention because bloggers kept mentioning it and the title was so cute and catchy. It was an inauspicious reason for selecting a book.  So Big won the Pulitzer in 1925.

In a lot of ways the book is plotless. Even Ferber herself thought this. She said, “I wrote it against my judgment;...Nothing ever really happened in the book. It had no plot at all, as book plots go. It had a theme, but you had to read that for yourself between the lines.” (Wikipedia) What I liked about it was how the book gives the reader a peek at what life was like back at the beginning of the twentieth century. It showed how hard people had to work for so little and how most dreams were incongruent with that lifestyle.

Would I recommend this book to others wanting to read a classic or past a Pulitzer Prize winner? No, I don't think so. The lack of a strong plot pulse, the poor character development of almost all the characters except Selena, and the sketchy descriptions left me wanting more. I'd recommend reading something by Willa Cather if a person wants to read a book set in a similar time frame. I think she is stronger writer, though I haven't read her 1923 Pulitzer book, One of Ours.

A note of amazement: I just checked. Women writers won the Pulitzer Prize for literature seven times in the first twelve years of the prize starting in 1921! See list here.

I read SO BIG as part of the Classics Club Spin activity which ended on June 1st. Completing the book by that date, I just didn't finish the review on time!

-Anne
Posted by Anne@HeadFullofBooks at 2:30 PM