Thanks to Lark Writes for giving me the inspiration to write short, poetic book reviews. Hers are called 'Haiku Reviews.' I'll make mine a little longer and call them tanka-poetry reviews. Similar to haikus, tanka poems are short, using only 31-syllables in the cadence pattern of 5, 7, 5, 7, 7. I'm catching up here on past-due reviews.

My daughter, Rita,
loved this book when she was young.
Margaret writes to
God on growing-up issues,
though she's not sure he exists.

A Beautiful Day in the Neighborhood: Neighborly Words of Wisdom from Mr. Rogers (With Movie Tie-in) by Fred Rogers (Penguin Books, 2019)

This book starts with Tom
Junod's Esquire piece, "Can You
Say...Hero?" about
meeting Fred Rogers, forming
a lifelong, inspired friendship.

When my daughter learned
I finally read this book,
she commented that
it is the favorite book
of 5th graders everywhere.

Deputy Sheriff,
Constance Kopp and her sisters
in a fiery romp.
The third book in the series
which is based on real people. 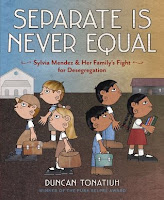 Separate Is Never Equal: Sylvia Mendez and Her Family's Fight for Desegregation by Duncan Tonatiuah (Abrams Books for Young Readers, 2014)

Ten years before Brown
vs. B.O.E, Sylvia
Mendez and her family
desegregated
schools in California.

An allegory
dramatizing the journey
people take before
they can live in "high places,"
a child of the good shepherd.

Quite an assortment and variety of books that seem incongruent, but they match my reading mood of late.


-Anne
Posted by Anne@HeadFullofBooks at 4:41 PM