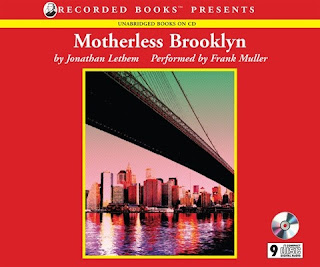 Back in early 2000s I read Jonathan Letham's Motherless Brooklyn for the first time. I can't remember how it found its way to me, but I read it and loved it. I even recommended it to my rather sweet but old church book club members. I can't remember the reactions to it but after this re-read I can only imagine that the reactions were those of shock and horror. How could one read a book with so much foul language and enjoy it? Well, I could and I did enjoy it a second time, too. This re-read involved my husband as captive audience as we listened to it during a long road trip together this past week.

In case you aren't familiar with the plot, I will attempt to summarize it succinctly. Lionel Essrog is an orphan. He also has Tourette Syndrome which manifests itself in the form of verbal outbursts of a very colorful and often humorous nature. He and three other orphans are chosen to work with a small-time mobster, Frank Minna, and to do his bidding which usually involves moving stolen goods from one location to another. Later, when they are grown, all four of the boys continue working for Frank and call themselves the Minna Men. Everyone thinks that Lionel is stupid because of his tics. But when Frank is murdered, only Lionel has the wherewithal to investigate it.

So Motherless Brooklyn is your classic who-dun-it with a big twist...Tourette's. I don't even know how to describe how different and delightful this makes the story. So I've decided to get help from other reviewers...


In Motherless Brooklyn solving the crime is beside the point. If you're a mystery maven, this might bother you. Instead, this is a novel about the mysteries of consciousness ... Unlike the stock detective novel it shadows, the thriller in which clarity emerges on the final page, Motherless Brooklyn immerses us in the mind's dense thicket, a place where words split and twine in an ever-deepening tangle. (Albert Mobilio, New York Times Review of Books)

A detective with Tourette's syndrome narrates a hard-boiled crime novel. Sounds like a gimmick, right? Another in the endless line of diversity dicks ... But Lionel Essrog, the twitching, barking, gabbling narrator is no movie-of-the-week novelty grafted onto a noir mystery. Maybe his Tourette's is a gimmick, but it's a gimmick with depth, with soul. Lethem, after all, walks the serious-fiction beat, and in his hands the compulsions of Tourette's become a kind of kaleidoscopic metaphor, ultimately (and somewhat paradoxically) reflecting the fundamental ethos of the mystery genre itself: the compulsion to restore order and rightness to a world thrown temporarily out of joint. (Gary Krist, Salon)

Author Jonathan Lethem...has created, from what sounds like a ludicrous gimmick, one of fiction's most memorable narrators. Through Lionel - nickname Freakshow - he explores the relationship between what makes us tic and what makes us tick ... The results are playfully poetic...The effect is gleefully absurd, even if the formulaic gumshoe plot pales next to the twinkle-toed narrative footwork ... At points, Lethem's conception of Lionel's syndrome is brilliantly vivid ... In Motherless Brooklyn, Tourette's is a microcosm of the human condition. Lionel describes it as something outside himself, like an invisible friend. It reminds us of the duality of human consciousness, how we all make war with our own gibbering interior monologues, because the brain has a mind, if you will, of its own. (Brian Logan, The Guardian)

To add to the madcap feeling of Motherless Brooklyn we got to experience it through the audio format. Since we were alone together in a moving vehicle we often found ourselves laughing out loud at the narration, sometimes bursting out from someplace unexpected. I'm guessing that our experience with the book was very different than those who read the print version. Having the benefit of the verbal tics read out to us was very funny. Was it that way for the print readers? I don't know. The voice actor, Frank Muller, did a fantastic job with a difficult voice assignment.


Frank Muller’s narration is nothing short of astounding; to say this would be a challenging piece to perform would be an understatement, and Muller has never been in better form. He gives Lionel’s Tourette’s persona a distinctly different voice and makes the lightning transitions from voice to voice with never a slip. Somehow he manages to make Lionel not a sentimental sideshow, but a fully human character you like right away. In less capable hands this might have been a disaster, but with the consummate skill of this audio superstar it becomes an achievement unlikely to be equaled--by him or anyone else. (AudioFile)

I just realized, as I was preparing to write this review, that I missed the book club where we would discuss it. Drats. I was looking forward to doing mental battle with my friends over a controversial yet remarkable piece of literature.