Top Ten Tuesday: The best horror books I've read from the Shortlist of 35 best horror novels ever written. (See list here). Admittedly I don't read many books in the horror genre, so I haven't read many of the books on this list, but I have read a few. I actually would debate with the creator of the original list that many of the novels aren't actually horror titles. See what you think. 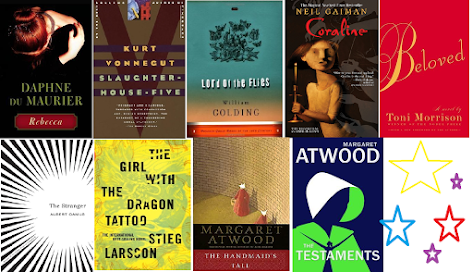 1. Rebecca by Daphne Du Maurier---I just watched the updated movie of this atmospheric novel. It definitely has a spooky vibe and is considered a classic gothic novel. (1938)

2. Slaughterhouse-Five by Kurt Vonnegut---not sure why this book is on the list. It is a war story and the events are horrifying but not scary-frightening. (1969)

3. Lord of the Flies by William Golding---once again a book that has a horrifying theme but it isn't frightening. Nonetheless it is on the list. (1954)

4. Coraline by Neil Gaiman---everyone's nightmare that somehow we will get lost from our family and can't find them. This one is truly frightening. (2002)

5. Beloved by Toni Morrison---indeed it is a ghost story but the haunting is unusual. (1987)

6. The Stranger by Albert Camus---I read this book in French so I'm not sure I understood it very well, but I just remember it being strange not frightening. (1942)

7. The Girl With the Dragon Tattoo by Stieg Larsson---A definite thriller with very dark themes. (2005)

8. The Handmaid's Tale by Margaret Atwood---definitely bleak and dystopian but horror. I think not. What do you think? (1995)

9. The Testaments by Margaret Atwood---sequel to Handmaid's Tale. Thrilling, not frightening. Your thoughts? (2019)

I've only read nine of the 35 books on the Shortlist. Take a look at it. How many have you read?What books are you shocked aren't on the list?

Here are some titles I expected but weren't on the list: Collected Stories of Edgar Allan Poe; Wuthering Heights; The Strange Case of Dr. Jekyll and Mr. Hyde; The Picture of Dorian Gray; more titles by Stephen King, Neil Gaiman, and Shirley Jackson.

Posted by Anne@HeadFullofBooks at 7:56 PM