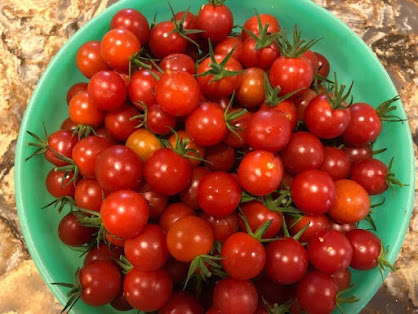 Weather: The weather is definitely fall-ish. The rain has arrived with wind and colder temperatures.

Family  News: This week I went to Northwest Trek Wildlife Park (all animals native to the Pacific Northwest) with my daughter and grandsons. We had such a good time and saw so many animals going about their active lives: a porcupine that was very interested in talking my grandson into letting him out of his confines; two badgers digging away; two bears playing in the water; a skunk who couldn't decide if he wanted to be in or out of his den; and two river otters playing. The park has a wonderful play area for kids. Ian loved the slide. The park was decorated for Halloween, so Ian found a lot of other things to distract him, like the circle of ghosts that invited him to dance with them. It was a perfect way to spend a fall day. 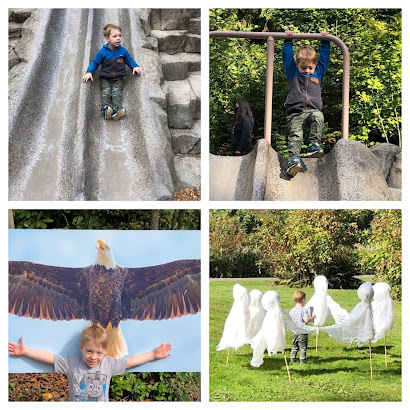 Good News: (Very random news this week. The polling for Biden gets better every week. It seems like people are definitely locking in Biden. Yet...eek! I am afraid to take my eyes off the news for fear that I will miss the thing that turns things upside down.)

1. Time in Trumpville, where we all live now, seems to move at warp speed. Therefore it seems like this event happened several years ago but it was actually this past week that Joe Biden gave the speech of his lifetime considered the 2020 Gettysburg Address. Listen to the whole thing. It is worth the time and will make you feel hopeful again. (PBS)

2. Pope Francis's new message could sway Catholics over to the Biden side. (The Guardian)

In this weekend’s document he [The Pope] makes it clear that populism and nationalism – of the kind Trump typifies – are damaging, warning that “a concept of popular and national unity influenced by various ideologies is creating new forms of selfishness and a loss of the social sense under the guise of defending national interests”.

3. I guarantee you will shed at least one tear over this sweet exchange...

Do it for Shamar. ❤️ pic.twitter.com/zTWwKb7H3E

4. My mom's cousin is from Norway, where they are having quite a bit of success keeping the coronavirus at bay. He sent us an interesting article about the one word that explains why---"dugnad." (Noteworthy)

Dugnad (pronounced doog-nahd); a Norwegian cultural tradition where community members work together towards a common goal, for the greater good for all.

Imagine how wonderful it would be if Americans would be willing to work together towards a common goal.

5. My hubby and I attended a Zoom meeting with Washington Gov. Jay Inslee and Hillary Clinton this week. During their discussion Jay mentioned that Washington is ranked as the best state for teachers in the whole nation. That was news to me and it made me feel quite proud. I told you to expect random good news! (Ranking of best states for teachers.)

6. Republicans know they need to make it as hard as possible to vote if they have a chance at winning. Therefore, they have been busy all year thinking up schemes to make voting more difficult. When challenged in the courts, though, their schemes rarely hold up. On Friday night a judge blocked an order from the governor of Texas to limit ballot drop boxes in each county to one, saying it placed an unacceptable burden on the elderly and disabled to turn in their ballots. (Statesman) In this campaign video, Samuel L. Jackson tells us to vote, not because he wants us to, but because Trump doesn't want us to. (I Will Vote)

7. Forbes Magazine has an excellent article about early voting and how it compares to what happened in 2016. As of 3 PM Saturday over 9 million people have already voted in the thirty states that are reporting these stats. (Forbes)

"And then there was a fly" and other funny stuff.

1. With the Vice-Presidential debate well underway, I was tempted to turn off the TV and do something, anything else. Then a fly landed on Pence's head and stayed there for over two minutes. It seems I was not the only one to be mesmerized. Social media exploded with "fly" related memes. Below is the photo I took of the TV screen. I thought adding the "Fly" poem by Ogden Nash was a snappy choice but not very political. 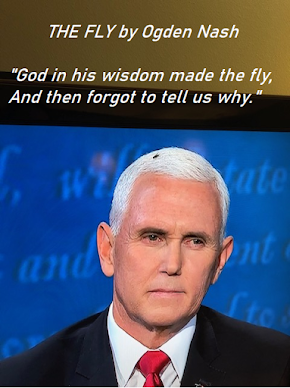 2. The Biden campaign picked up on the fly right away. Some guy had this cartoon up before the debate was over. Ha-ha, I never thought I'd be in league with flies. 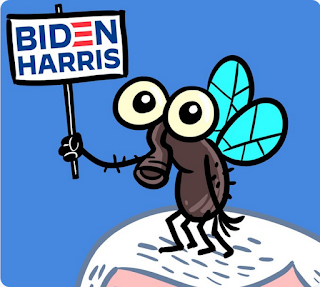 3. Within a few hours the campaign made 35,000 Biden/Harris flyswatters available for $10 each. They sold out quickly."Truth over flies." (Get it?...Truth over lies.) 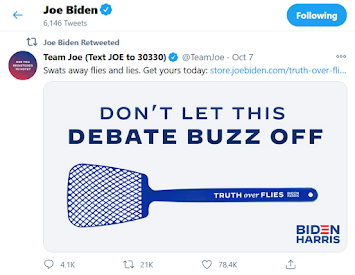 4. Other people said it was Ruth Bader Ginsburg who sent the fly. Smart fly! 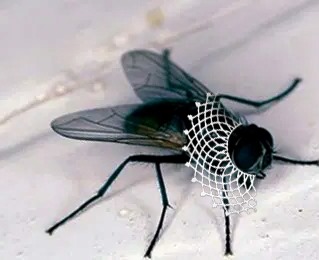 5. For years I've been warning people that things fall apart quickly when bad people are in charge. I use Lord of the Flies as my proof. Read the themes of this classic book and think about our country and our elected officials. Don't you agree with me now? 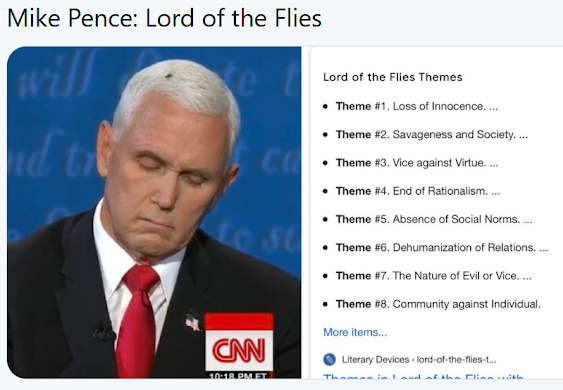 Enough about the fly? Here are a few other funny things---

7. Quite often I am left scratching my head at the "logic" of some Republicans. This makes no sense. 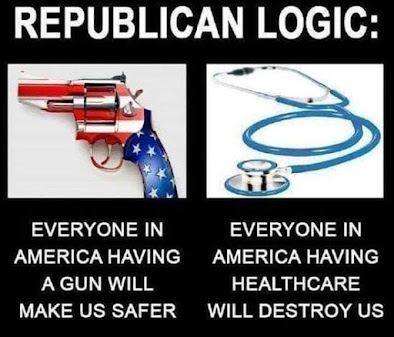 8. Twitter users take over #Proudboys hashtag with photos of LGBTQ love. (CNN)  While we are at it, let's call that terrorist group what they really are: Nazis. 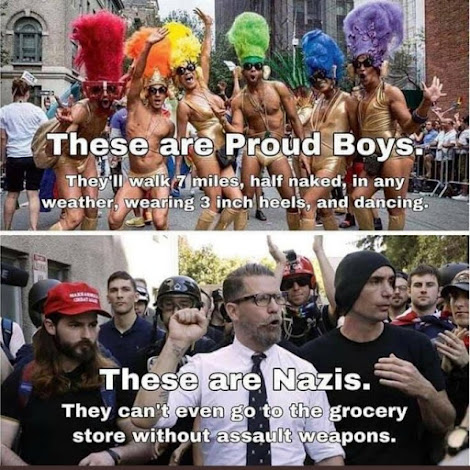 9. It is such a shame that schools can't be open or can only to be open in some hybrid arrangement so kids can't experience the full school vibe. (Sent to me by my daughter, a middle school teacher.) Maybe, in the long run, it will work out for them. I can still recall traumatic experiences when I was in junior high. 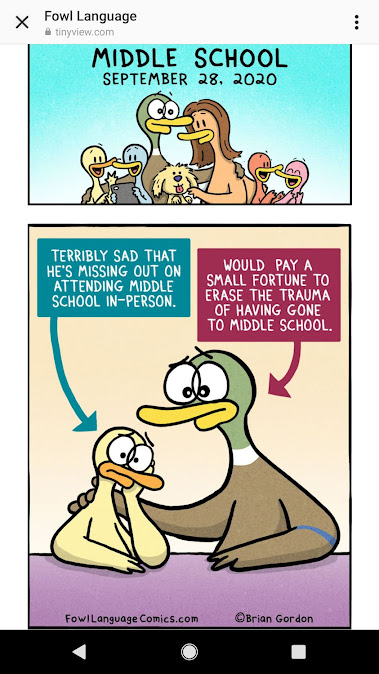 10. It sure seems like a year's worth of events happen in only a week during 2020. On the other hand, I hardly do anything personally except watch the Internet for each day's train wreck. 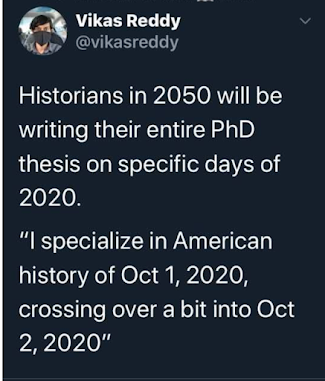 I really appreciate it when you leave me a comment below or on Facebook. Thanks so much for visiting. I hope this good news helps brighten your day.