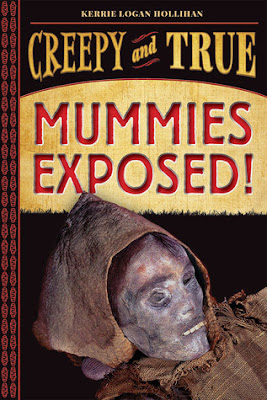 Well, here is the title of a book I never thought I'd read, much less review: MUMMIES EXPOSED! CREEPY AND TRUE by Kerrie Logan Hollihan. Though not my type of book, it is surprisingly well-written, interesting, and, dare I say, I like it!

We've all heard of mummies from Egypt. For goodness sake, King Tut is a mummy. But did you know that with the right conditions, mummies have been found in lots of other places in the world, usually dry and cold, but not necessarily?

Before I go further I guess I should define 'mummy' and distinguish it from skeletons and other aspects of the dead. "A mummy is a dead human or an animal whose skin and organs have been preserved by either intentional or accidental exposure to chemicals, extreme cold, very low humidity, or lack of air, so that the recovered body does not decay further if kept in cool and dry conditions" (Wikipedia). Often we think of mummies as purposely preserved, as done in ancient Egypt, where the internal organs are removed and the body is wrapped in cloth. But, as this book explains, most of the found mummies in the world were unintentionally preserved. It was just luck that caused them to be preserved and then found for archaeologists to study.

The weirdest mummies, in my estimation, are the bog mummies. Whether people died and fell into a bog, or were sacrificed or murdered, no one knows, but bogs do a real interesting number on a person as it preserves them. Because the bog is acidic, bacteria can't grow to cause decay, but the bones often become decalcified. The skin turns a silvery brown color. Wrinkles, hair, and fingernails are often perfectly preserved.

The saddest examples are the mummies of children found high in the Andes. They were sacrificed as part of a religious ritual and left to freeze to death in a fetal position. Archeologists were even able to study their blood and the contents of their stomachs , they were so perfectly preserved.

What I liked about the book:
What I didn't like:
-Anne