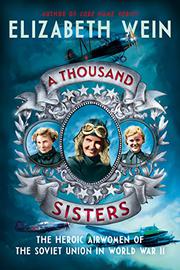 A THOUSAND SISTERS: The Heroic Airwomen of the Soviet Union in World War II by Elizabeth Wein is the true story of the only women to fly in combat, for any country, during war.


In the early years of World War II, Josef Stalin issued an order that made the Soviet Union the first country in the world to allow female pilots to fly in combat. Led by Marina Raskova, these three regiments, including the 588th Night Bomber Regiment—nicknamed the “night witches”—faced intense pressure and obstacles both in the sky and on the ground. Some of these young women perished in flames. Many of them were in their teens when they went to war.This is the story of Raskova’s three regiments, women who enlisted and were deployed on the front lines of battle as navigators, pilots, and mechanics (from the publisher).

A Thousand Sisters is Wein's first nonfiction work for teens. I've read several of her YA novels, Code Name Verity being the most well-known, and a few of them have had aviation themes. So Wein has the pedigree and knowledge required to write about aviation and flying in general. I am wondering if she is pilot herself. Hmm?

I hadn't even heard of the "Night Witches" prior to reading A Thousand Sisters and it is really an amazing and inspiring story of heroism. It is hard for me to imagine how primitive airplanes were in the 1940s. Some of the women had to fly in open cockpits, dropping the bombs overboard by hand. Most of the planes didn't start the war with radar or any kind of navigation instruments making flying at night especially dangerous because one cannot see landmarks to navigate by in the dark. Several of the Soviet female pilots died in crashes caused by not knowing where the ground was due to fog or the dark.

As surprising as it was for the Soviet Union to allow women fighter pilots, once the country reverted back to Russia less women are pilots now than in the 1930s. Even with their heroic history during WWII male dominance in the field has returned with a vengeance.

What I liked best about the book:
What I didn't like about it:
A THOUSAND SISTERS: The Heroic Airwomen of the Soviet Union in World War II earned a YALSA NONFICTION Honor in January 2020. It certainly deserved it.

-Anne
Posted by Anne@HeadFullofBooks at 1:50 PM