Nonfiction Review: DISASTER STRIKES! THE MOST DANGEROUS SPACE MISSIONS OF ALL TIME 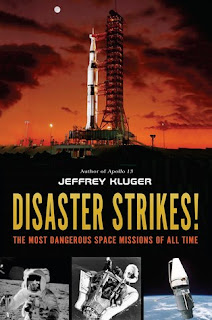 Scrupulously researched and written in a very accessible way, DISASTER STRIKES! THE MOST DANGEROUS SPACE MISSIONS OF ALL TIME by Jeffrey Kluger is not only easy to read but fascinating.

I grew up during the years of the Space Race, though I was young and mostly unaware of what was going on with our space program. I do remember watching, on our old black and white TV, several of the launches and being completely thrilled.

What I wasn't aware of was how many accidents occurred and even how deaths were caused by our race to the moon. After the Apollo program ended, I pretty much stopped paying attention until that fateful day in 1986 when the Challenger, with a teacher on board, blew up. I wasn't watching the launch, I was teaching that day and giving a test. My classroom that year was an old portable which was cold that day so I had my students come in to the school building to take a test in the library. As the students were hunched over their tests, an announcement came over the intercom system about the explosion of the Challenger. We all sat in stunned silence. And then, because there was nothing to be done about it from our angle, we resumed taking the test. That is one of the biggest regrets of my whole teaching career. Those poor kids were stunned and grieving and I made them continue taking a test. What a terrible decision.

Jeffrey Kluger is the science editor and senior writer for TIME magazine and he clearly knows how to write about complicated topics in a clear and interesting way. He not only writes about each disaster, thirteen of them, and what happened from a technical angle, but he includes what the astronauts were thinking and doing at the same time, making the information very personal. Often he included the astronauts last words, like those of the crew of the Challenger, letting us know that they were doing their jobs even in the face of disaster.

I learned so much, too. Before reading this book I knew about the Apollo 1 explosion and fire that killed all three on board. I had watched the film on Apollo 13 about the near-fatal problems aboard that vessel and the miraculous return to earth. Of course, I was aware of the Challenger and the Columbia's explosions which killed all seven astronauts on board. But I knew nothing about all the problems with the Gemini program, or those that the Russian space program experienced. And I was only vaguely aware, because I wasn't paying attention, to all the near crises aboard the space station.

What I liked best about the book:
What I didn't like:
I am tremendously glad that I read the book and hope that all secondary libraries get a copy of it and make their science teachers aware of it. Though the book is written for teens, I know adults will get a lot out of it, too.

Posted by Anne@HeadFullofBooks at 12:48 PM