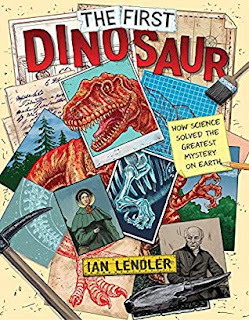 The First Dinosaur: When Science Solved the Greatest Mystery by Ian Lendler is a surprisingly excellent book. I say surprisingly because I had no idea what I didn't know about the discovery of dinosaurs. It brought to mind the old saying, "the student doesn't know enough to ask a question." That was me. I didn't even know enough to form questions in my head about the process. As I read The First Dinosaur I realized that people had been seeing bone fragments and other fossils for thousands of years and had no idea what they were looking at and had no way to check further. Until the 1600s up through the Scientific Age when men, usually gentlemen who had money and time to dabble and investigate, started to question the shape of some of the fragments, deciding that they looked like bones. One man's enthusiasm to know more led to another man's enthusiasm and so forth.

Back in the 1770s a remarkable bunch of men came together to dream up a new nation founded on democratic principles: Jefferson, Madison, Hamilton, Franklin, Adams, Jay, and Washington. The same thing happened in geology. "When the student is ready the teacher appears." The world was finally ready for geology and what else this science had to offer. This book highlights the lives of the remarkable men who uncovered the truth of age of the earth and found evidence in bone and fossils to identify the first dinosaurs: Steno (1680s) who made pioneering advances in geology and paleontology; Robert Hooke (1700s); William "Strata" Smith (1800s) who identified fossils in particular levels of strata; Georges Cuvier (France, 1800s) could read the strata and fossils records; Mary Anning (1800s) discovered and dug two of the first three dinosaur skeletons, as a woman she did not get credit for her discoveries; Gideon Mantell (1850s) was a fossil collector who became known as one of the two most renown dinosaur experts of his day; Richard Owen (1850s) became the British Cuvier and one of the most renown dinosaur experts of his day; William Buckland (1850s) an Oxford professor who did much to advance scientific advances in geology and paleontology.

Many men came together in the Royal Society to advance their thoughts and to finally identify and name the first dinosaur: Megalosaurus from bone fragments found near Oxford in a rock quarry.

I found this book not only fascinating but fun to read. There was enough about the personalities involved in all the discoveries to keep me interested. It is hard to imagine a world without the knowledge of dinosaurs. This book explains not only the discoveries made by these scientists, but also how the world found out about their discoveries, which was not an easy feat in the mid-1800s! I hope that young teen researchers find their way to this book and that they find it as compelling as I did.

What I liked about the book:
What I didn't like:
-Anne

Posted by Anne@HeadFullofBooks at 1:16 PM