Nonfiction Review: TORPEDOED: The True Story of the World War II Sinking of the Children's Ship 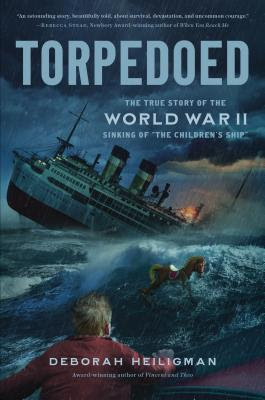 It is hard to believe that stories about the horrors of WWII are still emerging, but here we are:  TORPEDOED: The True Story of the World War II Sinking of the Children's Ship. In 1940, as German bombs were exploding over London and other cities in Great Britain, parents were desperate to get their children out of harms way. A government program called the Children's Overseas Reception Board (CORB) worked with parents to transport children aged from five to fifteen to Canada. There was a long waiting list to secure a spot on ships leaving Liverpool. The parents considered themselves lucky to have their children leave Great Britain for safe Canada.

In September 1940, a passenger liner SS City of Benares set sail with 406 people on board. 100 of them were children, 90 of them CORB children with adult escorts. On September 17th, not long after the British Royal Navy warship, which had been escorting the Benares, a German U-Boat submarine shot a torpedo at the passenger ship. So began a struggle for survival that would ultimately kill 258 people. Of the CORB children only thirteen of them survived. In TORPEDOED author Deborah Heiliegman tells the survival and fatal stories of many of the CORB children and their escorts. Several heroes emerge out of the tragedy.

Heiligman has made a name for herself as a YA nonfiction writer. Two of her previous books, Charles and Emma (2009 ) was a National Book Award finalist and Vincent and Theo (2017) was a YALSA Nonfiction Award winner. It also won a Printz Honor and the Boston Globe-Horn Book Award. Her writing is clear and concise, very accessible for teen readers.