Nonfiction review: POISON EATERS: Fighting Danger and Fraud in Our Food and Drugs 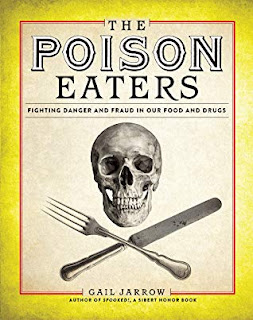 POISON EATERS: Fighting Danger and Fraud in Our Food and Drugs by Gail Jarrow is a middle grade/junior high nonfiction selection that should have crossover appeal to all teens and adults alike.


Formaldehyde, borax, salicylic acid. Today, these chemicals are used in embalming fluids, cleaning supplies, and acne medications. But in 1900, they were routinely added to food that Americans ate from cans and jars. Often products weren't safe because unregulated, unethical companies added these and other chemicals to trick consumers into buying spoiled food or harmful medicines. Chemist Harvey Washington Wiley recognized these dangers and began a relentless thirty-year campaign to ensure that consumers could purchase safe food and drugs, eventually leading to the creation of the U.S. Food and Drug Administration, or FDA. Acclaimed nonfiction and Sibert Honor winning author Gail Jarrow uncovers this intriguing history in her trademark style that makes the past enthrallingly relevant for today's young readers (from the publisher).

About this book, the reviewer from Kirkus Reviews said, "Revolting and riveting in turns, Jarrow's masterfully crafted narrative will fundamentally alter how readers view their food."

Revolting is right. Someone told me to never ask what was in a sausage. Well, Jarrow tells us what was in them in the early 1900s and it is disgusting: pieces of meat and fat, some which has fallen to the ground to be swept up with dead rats and rat poison, cut up together and made into a sausage. There were no laws and few enforcers to make sure that food was safe to consume. If a chemical, say formaldehyde, preserved meat, why not add it to fresh meat so it wouldn't spoil as quickly? There was no thought about what the chemical might be doing to the insides of a person who eats it. Thank goodness Dr. Harvey Wiley came along and doggedly sounded the alarm about the need to legislate safety measures for food standards, drugs, and cosmetics. Though it took him thirty years of trying finally the legislature did the right thing and founded the Food and Drug Administration. Whenever anyone says they are pining for the "good-ole-days" I'll point them to this book and tell them to read it before they get to be too nostalgic. It was the wild-west out there. Who knew what was really in the food we ate and the medicine we took. Egads.

Today when you listen to the news about the Trump Administration attempting to "drain the swamp" by getting rid of bureaucrats. Ask yourself what job to those people do? Are they testing foods, medicines, and cosmetics to make sure they are safe to use or eat? Do we really want to go back in time to the days before regulations? No.

What I liked about the book:
What I didn't like about the book:
By the way, the Poison Eaters were a group of a dozen men who volunteered to test the chemicals companies were putting into foods on themselves. For months, maybe years, they allowed themselves to be human guinea pigs for science.

-Anne
Posted by Anne@HeadFullofBooks at 2:11 PM