Nonfiction review: THE STONEWALL RIOTS: COMING OUT IN THE STREETS 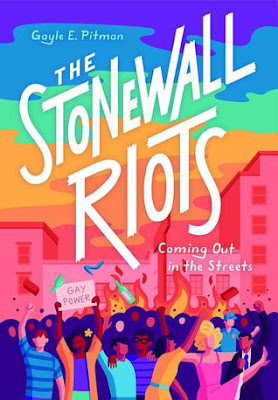 Last year was the 50th anniversary of the Stonewall Riots in Greenwich Village, New York City. Many people have never heard of these riots and others, like me, only have a cursory knowledge of them. THE STONEWALL RIOTS: COMING OUT IN THE STREETS is a new middle grade title that does such a good job of explaining the rioting that happened over the course of several days and some of the background information that lead to the Stonewall riots in the first place.
Though LGBTQ+ individuals still face prejudice and unequal protection under the law today this book takes a look at how much harsher and unfair things were in previous decades of American history. School children today probably do not realize how truly harsh the treatment has been in the past. The book gives a clear overview of this history with the use of photos of objects. Using/showing objects from history is a good way to tell a story that is complicated. And this is a complicated story to tell.
Starting with the first object, a photo of the Livery Stable from the 1840s which eventually became the Stonewall Inn, the location of the riots in 1969 readers get a sense of the history of the location and significance of the location. With each object the story unfolds more and more so readers understand that LGBTQ+ individuals were not allowed to drink and dance in regular bars, so they had to congregate in Mafia-run places where they were supposed to be safer from police raids because of the payoffs that were made. But that didn't necessarily prevent raids completely.

For years, if police raided 'gay bars' the individuals within, who had likely given a fake name on entry, would not fight back and would either allow themselves to be arrested, or would attempt to just slip away. But for some reason on the night of June 28, 1969 when the police arrived to raid the Stonewall Inn, patrons fought back, breaking windows, trapping the outnumbered police inside until backups could arrive, and causing quite a ruckus. For the next two of three nights the same thing happened with more and more people getting involved in the rioting. LGBTQ+ individuals were finally fed up with quietly going along with societies mores and discriminatory laws. This was the first surprise for me. In the 1960s groups like the Mattachine Society and the Daughters of Bilitis, gay and lesbian groups aimed at self-acceptance and societal aceptance urged gays to dress modestly and behave in a polite manner so as not to offend anyone. Those tactics weren't working very well. On that warm June evening, tactics shifted.

Pitman's choices of the fifty objects helped bring history to life of what happened leading up to the riots, during them, and beyond. Oddly the riots were barely covered by the press of the day. Even the Villiage Voice, a more progressive publication used insensitive wording to explain the participants of the riots. Few people were interviewed after the riots so little first hand knowledge is known about what happened. Once people started to discuss this event more openly, years later, many of the participants known to be there had passed away. If for no other reason, the importance of recording historical events makes this book worth reading.
Is a book about the history of  LGBTQ+ issues appropriate for middle grade students? Yes, indeed, however I often wonder what students will actually pick up a book like this and read it. That is probably more a condemnation of our society and how we are raising a generation of students who read very little and when doing research will go to the Internet, not even thinking of a book as a resource. Sigh. but as an adult, I was very happen to read this book. I learned a lot and found the use of objects to make a dissonant story coalesce nicely in my brain.
What I liked about the book:
What I didn't like about the book:
-Anne
Posted by Anne@HeadFullofBooks at 2:36 PM