Review and quotes: THE VANISHING HALF 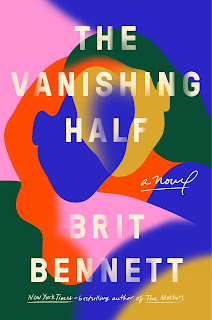 Title: The Vanishing Half by Brit Bennett

Summary: Desiree and Stella Vignes were twins living in an all-black community in Mallard, Louisiana, a town so small it wasn't even listed on a state map. The girls were beautiful and exotic and everyone knew and admired them. So it came as a shock to the whole town when the girls disappeared one day, not reappearing until several years later. Desiree hated Mallard and how the small town had nothing to offer her. Stella seemed to like it but decided to leave with her twin when an opportunity arose. In the end, Desiree returned to Mallard after an unhappy marriage but Stella never did. Why? Well it all started one day when Stella was a teenager. She went a nearby town on an errand and decided to look around in a shop normally not open to blacks. She wanted to know if she could pass for white and she could. It was a revelation to her to note the differences in the way people treated her when they thought she was white compared to how they treated her as a black person. Later in New Orleans, Stella was able to get a secretarial position because the hiring person didn't realize she wasn't white. Eventually she started dating her boss and decided to move with him to Boston. But to do this she had to leave behind her twin sister, her whole family in Mallard, and her blackness.

Both sisters married. Stella married her white boss and had a daughter named Kennedy, moving with her family to L.A. Though Kennedy probed Stella would never tell her anything about her past. Desiree married a black man and had a daughter, Jude, before she left him and moved home to raise her daughter in Mallard. At this point the story shifts the focus from the twins to their daughters. Years later the girls meet each other and Jude figures out that Stella is her long-lost aunt.

Review: Many years ago I read a book by Philip Roth called the Human Stain. In this book one of the characters, a college professor, is passing himself off to be white, though he was born black. Until I read that book I never really even thought of it as a possibility, passing for another race. In Vanishing Half we find Stella completely miserable since she has cut herself off  from her family and her heritage. By extension, Kennedy is also unmoored, not knowing her own history. The book really raises some hard questions about blackness with no easy answers. But in this book at least we find that Desiree and Jude are whole. Stella and Kennedy are better off financially but they seemed to be floating, untethered in a sinking lifeboat, unable to reach shore.

The Vanishing Half is a book club selection for this month and I know what the first question will be. Did I like the book? Honestly I could split the book in half and say I liked the first half a lot and the second half not as much. As soon as the narrative shifted to the daughters the story line seemed to lose some of it's umph. I'll be interested to hear what others thought of the book. Here is the reading guide from Penguin Random House with more discussion questions.

Posted by Anne@HeadFullofBooks at 4:22 PM